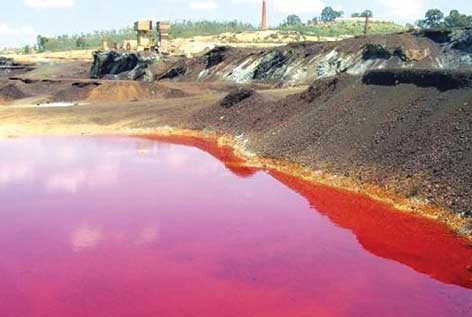 While acid mine drainage is an added threat to South Africa’s already constrained water supply, it also provides a potential solution, the Johannesburg office of management consultancy AT Kearney says in a report due for release today.

It is projected that South Africa could run out of water by 2025 and Gauteng, SA’s and Africa’s economic hub, by as early as 2015.

However, technology is already available that can be used to purify acid mine water, making it both drinkable and usable for industry.

“Demand will outstrip supply.… In this tight situation a single drought would create a water crisis for the region. Treating acid mine water could help relieve this water shortage. It would also create opportunities for industrial water users like Eskom and mining companies, as well as agricultural users that are short of water,” says AT Kearney SA principal Martin Sprott.

Acid mine water can be made drinkable and usable for industry by desalinating it — removing sulphates from acid mine water that has been “neutralised” by adding alkalis. But this process is not yet part of the short-term plan approved by the Department of Water Affairs.

This is despite the department agreeing that “some degree” of desalination is appropriate.

In some cases the polluting elements can be turned into useful products. An example is BHP Billiton and Anglo American Thermal Coal’s eMalahleni water treatment plant that produces gypsum sludge as a by-product, and sells this to the manufacturing industry, for use as gypsum board and building materials.

The problem is pressing for South Africa because of the country’s low average annual rainfall (at 450mm, less than half the global average of 850mm) and because, as pointed out in a Council for Scientific and Industrial Research report last year, 95% of South Africa’s freshwater resources had already been allocated by 2005.

It is expected that if the Witwatersrand’s acid mine drainage problem is not attended to before acid water seeps into the Central and Eastern basins, the region will suffer shortages of usable water from 2014. Also, the effect of the additional water supply from the second phase of the Lesotho Highlands Water Scheme will be diminished because some of that water will be needed to dilute “neutralised” acid mine water released back into the river.

The Treasury has already allocated R224m to solving the problem in the short term. However, the state-owned enterprise tasked with treating acid mine water, the Trans-Caledon Tunnel Authority, says R924m is needed just to provide a short-term solution to the Witwatersrand problem.

Water supply is already a concern to industry, with 58% of South African businesses surveyed by the Carbon Disclosure Project (CDP) for a report released earlier this year claiming they had already experienced the detrimental effects of water scarcity.

Despite acid mine drainage being pinpointed as a looming problem in the 1970s, the simple cleaning processes available and the “many parties with powerful incentives to act — from government to nongovernmental organisations to mining companies” — no single party has the required combination of scale, resources and credibility to deal with the problem, says Mr Sprott.

Add to this widespread poverty and the fact water is seen as a human right in South Africa.

“Water is regarded as a human right in South Africa, secured by the constitution. Protecting this right means making affordable water available to everyone.… Combining the imperative of low-cost access to water for all with fully-funded solutions has complicated the implementation of treatment processes,” he says.

AT Kearney proposes government, industry and non-governmental organisations form a partnership that could “bring a fast and comprehensive solution” to the problem, saying experience in the Philippines, Europe and Singapore shows that public-private partnerships are effective in dealing with polluted waters.

“We hope to turn the discourse around.… In all three spheres we do see appetite to talk together, and we do see a public-private partnership as a way out of the situation, so hopefully we are pushing at an open door,” says Mr Sprott.

Industry has a vested interest in a partnership because this would obviate the need for individual businesses to carry the cost of desalination, and the same counts for the government, he says. “If Eskom, for example, received water with high salinity levels (typical with acid mine water) they would first have to treat it before it was of a suitable quality to be used in their processes.”