This innovative rainwater harvesting system is not just capable of collecting rainwater for you, but it will also generate electricity to light up your house from wind. The system has been designed by Julien Bergignat who has named it the Eol’eau. 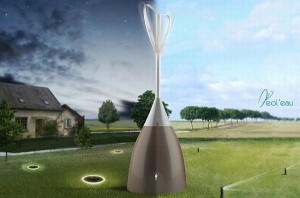 As has already been mentioned above the system does not just provide water for your consumption, it will also help you cut down on your electricity bill since it can generate electricity from wind. This is one system which all the environmentalists will love dearly. It saves water by collecting rainwater and it produces clean energy at the same time. The system has been designed in two modules. The base collects water from rain and the wind turbine above uses generates electricity from thunderstorms. The base can collect up to 600 liters of water which can be used for various things.

What many people overlook, is that rainwater harvesting and storing water in water tanks saves energy too.  Rain water collected off your roof and directed to a water tank via gravity obviously does not require any electricity use.  If water can be extracted from the water storage tanks via gravity feed, that saves even more energy.  So rainwater tanks not only save you on your water bills but on your electricity bills too.  Plastic or ‘poly’ water tanks are usually the most convenient to homeowners and if space is really an issue, underground water tanks are an option.