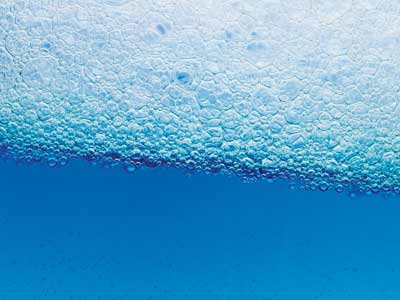 Water is amazing. It occupies about 2/3rds of the Earth’s surface. It is the basis of life in many ways. It interacts with the atmosphere as a major cleanser of sorts. So how does it do it? Some water molecules split the difference between gas and liquid, a study in Nature shows. Air and water meet over most of the earth’s surface, but exactly where one ends and the other begins turns out to be a surprisingly subtle question. A new study in Nature narrows the boundary to just one quarter of water molecules in the uppermost layer — those that happen to have one hydrogen atom in water and the other vibrating freely above.

Some water molecules straddle the gas and liquid interphase, according to senior author and USC Dornsife Associate Professor of Chemistry Alexander Benderskii, who said the free hydrogen behaves like an atom in gas phase, while its twin below acts much like the other atoms that make up the bulk of the water.

The finding matters for theoretical reasons and for practical studies of reactions at the water’s surface, including the processes that maintain a vital supply of nitrogen, oxygen and carbon dioxide in the atmosphere. With this new concept how water interacts with the air may be better defined.

“A lot of chemical reactions that are responsible for our atmospheric balance, as well as many processes important in environmental chemistry, happen at the air-water interface.” Benderskii said.

He added that the study provided a new way for chemists and biologists to study other interfaces, such as the boundary between water and biomembranes that marks the edge of every living cell.

In their study, Benderskii and his colleagues used techniques they invented to test the strength of hydrogen bonds linking water molecules (from the hydrogen of one molecule to the oxygen of another). These are the bonds that keep water a liquid at room temperature.

Specifically, the researchers inferred the bond strength by measuring the hydrogen-oxygen vibration frequency. The bond gets stronger as the frequency decreases, similar to the pull one feels when slowing down a child on a swing.

The researchers focused on the straddling molecules with only one hydrogen atom in water. Compared to other bonds deeper in water, “the hydrogen bond is surprisingly only slightly weaker,” according to Benderskii.  Likewise, the bond for the hydrogen atom sticking out of the water is similar in strength to bonds in the gas phase.

The researchers concluded that the change between air and water phases happens in the space of a single water molecule.

While the transition happens in the uppermost layer of water molecules, the molecules involved change constantly. Even when they rise to the top layer, molecules for the most part are wholly submerged, spending only a quarter of their time straddling air and water.

If the straddling molecules constitute the boundary, it would be analogous to a wood fence where there are openings which are constantly and rapidly changing. With the hydrogen atom sticking up this is a series of bumps on the fence that are higher than the average fence height.

What all of this means is to be determined. However, it allows for the potential of new boundary interrelationships and an understanding of how it works.

Also see Exploring the properties of water and Freshwater 101.