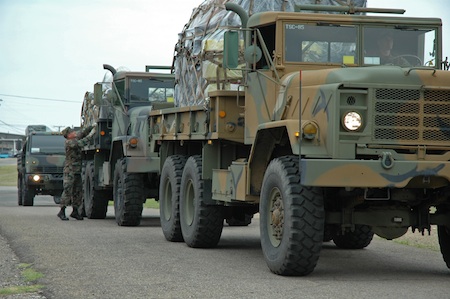 Access to clean, renewable energy is becoming a priority for the Department of Defense and military agencies around the world. That’s according to a new report by Pike Research. The report says renewable energy is a driving force behind increasing the efficiency of military operations and a means of improving energy independence. The new research finds spending on renewable energy technology by the military will rise rapidly over the next two decades, growing from $1.8 billion per year in 2010 to $26.8 billion by 2030. Most of the spending will be on mobile applications including portable soldier power as well as land, air and sea vehicles.

The Pike Research report says for military facilities, the market is largest for solar energy, followed by wind power and geothermal.

In the mobility domain, the focus is on biofuels and synthetic fuels for tactical vehicles, trucks, tanks, fighter jets and naval vessels. The report says the military initiatives focused on clean energy technologies will have a substantial impact on the development of the industry as a whole. The branches of the Department of Defense all combine to form the single largest user of energy in the world.

U.S. Military officials announced last year they would rely on renewable energy sources for 50 percent of its power by the year 2020. The Navy has pledged to have a Green Strike Group by next year, a fleet of vessels and ships powered by biofuel. Navy officials also pledged to cut petroleum use in its non-tactical fleet by half, by phasing in hybrid and electric vehicles.

Also read Green Soldiers: 8 ways armies are reducing their eco-impacts. The military’s investment in clean, sustainable energy technology is good news for everybody as well as the environment.  Many of our everyday conveniences, e.g. GPS, have come from military technology.  Solar energy systems are already developing at a rapid pace; with the military’s R&D we can expect solar panels and solar cells to become even smaller, lighter and more efficient.

Contact us for a free quote on a solar geyser, water system, rain water tank or water tank.  Building or renovating?  Consider using eco-friendly building materials such as bamboo.