More than half of China’s cities are affected by acid rain and one-sixth of major rivers are so polluted the water is unfit even for farmland, a senior official said on Friday in a bleak assessment of the environmental price of the country’s economic boom. 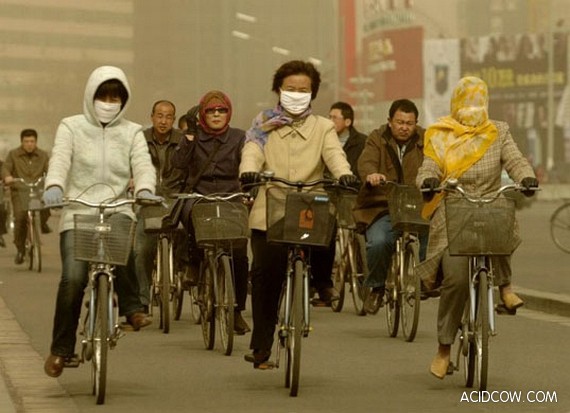 The environmental degradation which has accompanied China’s breakneck growth has emerged as one of the most potent fault lines in Chinese society, driving protests against Beijing’s perceived inability to effectively tackle the problem.

China has repeatedly promised to clean up its stressed environment. But it often fails to match that with the resources and political will to enforce Beijing’s mandates, as local officials put growth, revenue and jobs ahead of environmental protection.

The waters off the booming cities of Shanghai, Tianjin and Guangzhou were rated as severely polluted, with only stretches around the resort island of Hainan and parts of the northern coast given a totally clean bill of health, Li said.

Pollution monitors found that 16.4% of China’s major rivers were classified as worse than grade five, he added, meaning that they do not even meet the standard needed for agricultural irrigation.

Just 3.6% of the 471 cities monitored got top ratings for air cleanliness, and there was a continued loss of biodiversity around the country, Li added.

Heavy metal pollution was a particular worry, he said, not only on the health front but also for stability in society.

“These heavy metal pollution incidents not only seriously threaten people’s health, they affect social stability, and it ought to be said this is a rather severe issue,” Li said.

The world’s top consumer and producer of lead, China has struggled to rein in polluting industry under lax environmental regulations. Lead-poisoning, especially in children, has roused public anger and resulted in sometimes violent protests.

Unhappiness over the environment in China encompasses a broad range of other areas though.

Last month, the vast northern region of Inner Mongolia was hit by sporadic demonstrations by ethnic Mongolians infuriated by the damage caused to traditional grazing lands, unrest set off by the death of a herder under the wheels of a coal truck.

The government has since begun a month-long crackdown on the coal industry and vowed to “leave no stone unturned” in their probe into mines which damage the environment or seriously affect residents.

“As for that incident, I know that relevant departments are currently proactively and appropriately dealing with it. The situation has basically calmed down,” Li said, when asked about the protests.

“The Environment Ministry will be paying close attention, and will give help, support, supervision and guidance” to the probe into the environmental problems of coal mines in Inner Mongolia, he added.

But in a comment underscoring the challenge China faces to balance protection of the environment with the need for economic growth, Li said it was important not to demonize the resource extraction sector.

“In places like Inner Mongolia, with their rich natural and mineral resources, their exploitation over the past few years has certainly had a great effect on local economic development and the improvement of people’s livelihoods.”

Why should we be concerned about China’s terrible environmental record?  Because, like the deforestation of the Amazon, environmental degradation in one part of the world negatively affects the rest of the world in one way or another.  Another cause for concern, especially for those living in Southern Africa, is China’s involvement with Zimbabwe’s agricultural sector.  If the Chinese have little regard for their own environment, what will they do to land that doesn’t belong to them?  The Chinese need food and farmland to support their own country- it is unlikely that much of the foodcrops they produce in Zimbabwe will remain for Zimbabweans- further increasing the threat of famine to Zimbabwean citizens.  This is political imperialism being replaced by economic imperialism which does not bode well for Zimbabwe’s people and environment.