A portion of Zimbabwe’s new black farmers will be trading part of their land to Chinese investors, in exchange for funding for infrastructural development and other farming support. 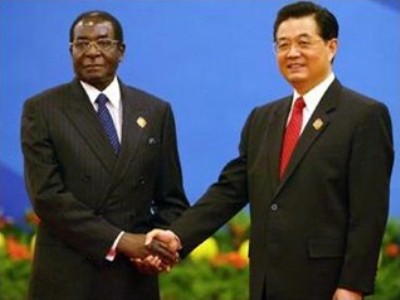 The Zimbabwean government has signed a deal with the Chinese government which will mostly affect farmers on previously white-owned land in the Mashonaland East province.

Reports indicate that under this so-called ‘twinning programme” between Zimbabwe and China, affected farmers will sign a 25-year-renewable contract with their Chinese partners.

In return the Chinese will give them money to help them develop farming operations on their remaining farmland, and also buy the crops they produce.

Some of these investors- reportedly from China’s Hubei Province- are already on some of the targeted properties, according to dispossessed white Zimbabwean farmer Ben Freeth.  Freeth is an outspoken critic of Mugabe’s land reform policies and spokesperson for the non-governmental organisation, the Southern African Developmental Community (SADC) Tribunal Rights Watch.

He said the Zimbabwean-China deal was “neo-colonialism at its very worst”.  “It may make derelict farms productive but at what benefit to Zimbabwe will remain to be seen,” he said.

In recent years Zimbabwe has hovered on the brink of famine.  Only about 200 white commercial farmers are left in a country that was once considered the breadbasket of Southern Africa.  Meanwhile, most of the land invaders from president robert mugabe’s ZANU-PF party are unable or unwilling to maintain the farming production levels of their predecessors.

Some 6000 Zimbabwean landowners have been forcibly dispossessed of their title deeds over the last decade of mugabe’s internationally criticised land reform programme.

“Whereas the whites were Zimbabweans- mostly born and bred with a commitment to their country and its people for the future – the Chinese are here to rape the country for their own ends,” said Freeth.  “They are very unpopular with the ordinary black workers.”

It will be up to individual landowners to try to contest the programme, he continued.  “We understand that the Chinese want to pay for the farms that they’re taking but it remains to be seen whether any of the owners will get paid or not.”

“China is increasingly dependent on raw materials and food produced elsewhere.”  “Is it preferable for an African government to prefer foreign expertise to home-grown experience that has already proven itself?”

Meanwhile a six-month long independent review of the SADC Tribunal has recently released its results.  The review found that, contrary to Mugabe’s opinion and actions in recent years, SADC law should be supreme over SADC member countries’ domestic laws.  This means that all orders and decisions the SADC Tribunal issues should be binding and enforceable within all member countries.  Mugabe has repeatedly defied SADC Tribunal rulings ordering the ZANU-PF and its members to desist from unlawfully forcing people off their land without due compensation.  However, shortly before Farmer’s Weekly went to print it was reported that SADC leaders had decided to dissolve the Tribunal for another year, to review the court yet again.

Freeth said that while established and successful white farmers have been evicted from their farms, a number of similarly prosperous black farmers have suffered the same fate. SADC Tribunal Rights Watch is currently highlighting the plight of Luke Tembani (74), who wants the Tribunal to be given more teeth in its dealings with Mugabe.  After being evicted from his flourishing farming enterprise, Tembani has reportedly had to resort to selling small packets of sugar to support his family.

China has a very poor environmental and human rights track record and one wonders how long-suffering people of Zimbabwe will cope with this form of neo-colonialism.  China has no humanitarian interest in Zimbabwe but is simply there (and in other African countries) to grow crops and obtain natural resources for its own benefit.  It is also human nature to look after one’s own property and resources far better than rented/leased property; if China’s environmental degradation and pollution of its rivers is anything to go by, one wonders what will happen to the Zimbabwean land that China takes control of (and the negative effects that neighbouring countries like South Africa and Mozambique will experience).