Is It True That Farmers Feed Antibiotics To Livestock To Make Them Grow Faster?

I always thought the ‘it makes them grow faster’ reasoning for why they put antibiotics in animal feed was a myth and that the truth was more complex. Farmers found they could crowd animals while keeping disease levels down – giving consistently higher meat and dairy production – if they constantly laced the feed with a witches brew of antibiotics. Yes, if farm animals have to fight off frequent infections they are going to put more energy into getting better and less into growth or 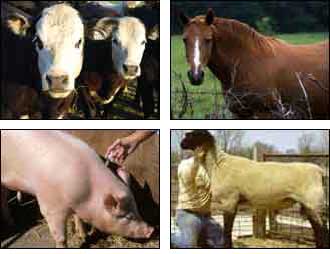 lactation; but there is another way to view this trade-off.

Animals with enough space to step away from where they just pooped and not having to share the air with 2,000 more just like them might not get sick as often.

Either way, I can see where the antibiotics-in-feed controversy is headed. If antibiotic feeding is phased out entirely or even restricted significantly, feedlot, dairy barn, swine house, and chicken house owners will all have to spend more on barn space, labor, machines and land. They will move toward something akin to ‘Organic-lite‘ slash ‘Free Range-lite.’ Who can guess what dumb name they will come up with for it?

At any rate, The Washington Post reports today that a lawsuit is being filed to force a regulatory decision one way or the other.

“Several environmental and public health groups filed suit against the Food and Drug Administration on Wednesday to try to force the government to stop farmers from routinely adding antibiotics to livestock feed to help animals grow faster.The groups say widespread agricultural antibiotic use and the FDA’s allowance of the practice are compounding a public health crisis: the increasing prevalence of “superbugs” that infect people and do not respond to antibiotics.”

Companies that make and distribute the antibiotics are going to pull out the heavy guns to lobby against this – seeking a Congressional over-ride of an ‘anti-antibiotic’ judicial outcome .

The opposition strategy is obvious, going into the Iowa primaries. ‘Dirty stinking liberals are trying to ruin the good hard working farmers who put the meat on our tables.’ WaPo quotes one lobbyist as already labeling those opposed to antibiotic feed additives as “Anti-modern livestock-production groups.” (I get the idea; but it makes for a poor political talking point.)

Related.
I wonder if the runoff from feedlots and so on – especially with all the rainstorms and flooding in the heartland – spreads superbugs directly or even indirectly to drinking water supplies?

Do they give daily antibiotic supplements to short kids so they will become basketball stars by Middle School? No, they do not. Why do people think feeding antibiotics to cows and pigs and chickens makes them grow faster? Jeez.

Routine antibiotics use in raising food animals makes bacteria more resistant, which in the long-term, is counter-productive.  The pharmaceutical companies will probably be the only ones to benefit as farmers continually require stronger/different antibiotics for their ever-weakening herds.  There is something that we, as consumers can do- buy certified free-range meat only.  If possible, verify the free-range claims and try to buy local.  Read: Seven things you need to know when buying eco-friendly food.  There is no doubt that antibiotics in meat and overuse of antibiotics in human health is bad for the environment too, for example antibiotics causing groundwater pollution.