Exploring the Properties of Water

Is It True That Farmers Feed Antibiotics To Livestock To Make Them Grow Faster? 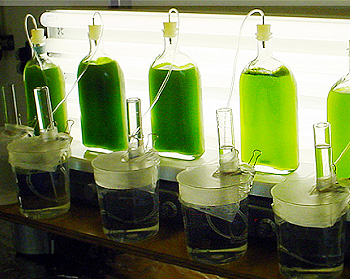 Many kinds of algae and cyanobacteria, common water-dwelling micro-organisms, are capable of using energy from sunlight to split water molecules and release hydrogen, which holds promise as a clean and carbon-free fuel for the future. One reason this approach hasn’t yet been harnessed for fuel production is that under ordinary circumstances, hydrogen production takes a back seat to the production of compounds that the organisms use to support their own growth.

But Shuguang Zhang, associate director of MIT’s Centre for Biomedical Engineering, and postdocs Iftach Yacoby and Sergii Pochekailov, together with colleagues at Tel Aviv University in Israel and the National Renewable Energy Laboratory in Colorado, have found a way to use bioengineered proteins to flip this preference, allowing more hydrogen to be produced.

“The algae are really not interested in producing hydrogen, they want to produce sugar,” Yacoby says — the sugar is what they need for their own survival, and the hydrogen is just a byproduct. But a multitasking enzyme, introduced into the liquid where the algae are at work, both suppresses the sugar production and redirects the organisms’ energies into hydrogen production. The work is described in a paper being published online this week in the Proceedings of the National Academy of Sciences, and was supported in part by a European Molecular Biology Organisation postdoctoral fellowship, the Yang Trust Fund and the US Department of Energy’s National Renewable Energy Laboratory.

Adding the bio-engineered enzyme increases the rate of algal hydrogen production by about 400 per cent, Yacoby says. The sugar production is suppressed but not eliminated, he explains, because “if it went to zero, it would kill the organism.”

The research demonstrates for the first time how the two processes carried out by algae compete with each other; it also shows how that competition could be modified to favour hydrogen production in a laboratory environment. Zhang and Yacoby plan to continue developing the system to increase its efficiency of hydrogen production.

“It’s one step closer to an industrial process,” Zhang says. “First, you have to understand the science” — which has been achieved through this experimental work. Now, developing it further — through refinements to produce a viable commercial system for hydrogen-fuel manufacturing — is “a matter of time and money,” Zhang says.

Ultimately, such a system could be used to produce hydrogen on a large scale using water and sunlight. The hydrogen could be used directly to generate electricity in a fuel cell or to power a vehicle, or could be combined with carbon dioxide to make methane or other fuels in a renewable, carbon-neutral way, the researchers say.

In the long run, “the only viable way to produce renewable energy is to use the Sun, [either] to make electricity or in a biochemical reaction to produce hydrogen,” Yacoby says. “I believe there is no one solution,” he adds, but rather many different approaches depending on the location and the end uses.

This particular approach, he says, is simple enough that it has promise “not just in industrialised countries, but in developing countries as well” as a source of inexpensive fuel. The algae needed for the process exist everywhere on Earth, and there are no toxic materials involved in any part of the process, he says.

“The beauty is in its simplicity,” he says.

Algae is likely to become more and more prevalent in our everyday lives; read In The Future, Everything Will Be Made From Algae.