Water – The Lifeblood of The Human Body

It is estimated that almost two billion people around the world will tune into see Prince William marry Kate Middleton. It is no surprise that hysteria surrounding the event has reached epic proportions as every detail of the big day has been covered by news services. However amid all the speculation about the dress, the route and the guest list, there hasn’t been much talk about the wedding’s carbon footprint and environmental impact – until now! According to The Telegraph, the wedding is set to generate more than 6,765 tons of carbon dioxide equivalents (CO2e) – that is 10 times the amount of greenhouse gases the Buckingham Palace produces for in a whole year and 1,230 times the annual emissions of the average UK household.

According to Landcare Research, which has developed an internationally recognized method of counting carbon emissions, a lot of the carbon is expected to be caused by the large number of international guests flying in from all over the world, as well as the vehicles that will be used to transport them and other well-wishers and tourists to the capital. Approximately 3,957 tonnes of CO2e will be generated by the 400,000 people travelling on the tube, while an additional 200,000 people are expected to arrive via national rail.

It is important to note that these figures don’t include the amount of CO2 that will be generated by street parties, power usage from the international media and the energy used to create millions of tons of Union Jack bunting and flags.

However it must be said that the Royal Family ARE making an effort to be as green as possible. The Prince of Wales has already said he will be providing local, seasonal food

and flowers and will be turning off the lights of Buckingham Palace at night (much to the anger of many in the international media). Also, all documents are said to be printed on recycled paper, and FSC-certified wood will be used to build the media stands.

Prince William and Kate have also reportedly done their part by choosing an engagement ring made from Welsh gold rather than minerals from an exploitative mine. The dress is also said to be organic, made from vegan silk and organic Fair Tade cotton. (It’s not like she was going to wear a second-hand dress.) The couple has also asked guests to plant trees for them and make donations to charities including Earthwatch.

Speaking on the subject, a spokesman from Clarence House and St. James’ Palace was quoted as saying: “Clarence House and St James Palace always strive to minimize their carbon emissions and make any event as environmentally friendly as possible. The royal wedding is no exception.”

Plans to recycle materials in the aftermath of the big day are also afoot. Veolia Environmental Services, Westminster City Council’s waste management contractor, have said they expect to collect approximately 140 tonnes of waste, much of which will be recycled.

So there you go. It’s not all b 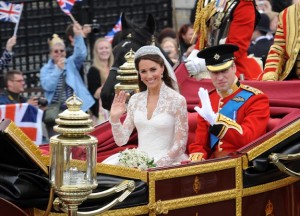 ad. As for me, I’m doing by part – instead of watching the wedding on T.V., I’m opting to go camping for the weekend and watch the highlights on YouTube. Congratulations Will and Kate, have a lovely day – thanks for the day off.

An event of this nature is always going to have a large carbon footprint.  It is encouraging that the Royal Family, to whom so many people look up to, are aware of the inevitable environmental impacts of the Royal Wedding and are trying to offset and reduce these impacts wherever possible.