A virus is a small agent that can replicate only inside the living cells of organisms. Most viruses are too small to be seen directly with a light microscope. The shapes of viruses range from simple helical and icosahedral forms to more complex structures. The average virus is about one one-hundredth the size of the average bacterium. Researchers at MIT have found a way to make significant improvements to the power-conversion efficiency of solar cells by enlisting the services of 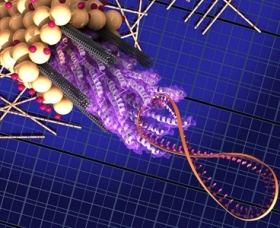 tiny viruses to perform detailed assembly work at the microscopic level. In a solar cell, sunlight hits a light-harvesting material, causing it to release electrons that can be harnessed to produce an electric current. The new MIT research, published online in the recent journal Nature Nanotechnology, is based on findings that carbon nanotubes — microscopic, hollow cylinders of pure carbon — can enhance the efficiency of electron collection from a solar cell’s surface.

Previous attempts to use the nanotubes, however, had been thwarted by two problems. First, the making of carbon nanotubes generally produces a mix of two types, some of which act as semiconductors (sometimes allowing an electric current to flow, sometimes not) or metals (which act like wires, allowing current to flow easily).

The new research, for the first time, showed that the effects of these two types tend to be different, because the semiconducting nanotubes can enhance the performance of solar cells, but the metallic ones have the opposite effect. Second, nanotubes tend to clump together, which reduces their effectiveness.

And that’s where viruses come to the rescue. The research team found that a genetically engineered version of a virus called M13, which normally infects bacteria, can be used to control the arrangement of the nanotubes on a surface, keeping the tubes separate so they can not short out the circuits, and keeping the tubes apart so they do not clump.

The system the researchers tested used a type of solar cell known as dye-sensitized solar cells, a lightweight and inexpensive type where the active layer is composed of titanium dioxide, rather than the silicon used in conventional solar cells. The same technique could be applied to other types as well, including quantum-dot and organic solar cells, the researchers say. In their tests, adding the virus-built structures enhanced the power conversion efficiency to 10.6 percent from 8 percent — almost a one-third improvement.

The viruses are used to help improve one particular step in the process of converting sunlight to electricity. In a solar cell, the first step is for the energy of the light to knock electrons loose from the solar-cell material (usually silicon); then, those electrons need to be funneled toward a collector, from which they can form a current that flows to charge a battery or power a device. After that, they return to the original material, where the cycle can start again. The new system is intended to enhance the efficiency of the second step, helping the electrons find their way.

The viruses actually perform two different functions in this process. First, they possess short proteins called peptides that can bind tightly to the carbon nanotubes, holding them in place and keeping them separated from each other. Each virus can hold five to 10 nanotubes, each of which is held firmly in place by about 300 of the virus’s peptide molecules. In addition, the virus was engineered to produce a coating of titanium dioxide (TiO2), a key ingredient for dye-sensitized solar cells, over each of the nanotubes, putting the titanium dioxide in close proximity to the wire-like nanotubes that carry the electrons.

In addition, the viruses make the nanotubes soluble in water, which makes it possible to incorporate the nanotubes into the solar cell using a water-based process that works at room temperature.

Prashant Kamat, a professor of chemistry and biochemistry at Notre Dame University who has done extensive work on dye-sensitized solar cells, says that while others have attempted to use carbon nanotubes to improve solar cell efficiency, “the improvements observed in earlier studies were marginal,” while the improvements by the MIT team using the virus assembly method are “impressive.”

The image with this story shows the virus strand of DNA (the figure-8 coil on the right) attached to a bundle of proteins called peptides. The virus coat proteins (the corkscrew shapes in the center) which attach to the carbon nanotubes (gray cylinders) and hold them in place.

Because the process would just add one simple step to a standard solar-cell manufacturing process, it should be quite easy to adapt existing production facilities and thus should be possible to implement relatively rapidly, Belcher (one of the researchers) says.

The pace at which nanotechnology is developing is remarkable and all the better that it can be put to use for eco-friendly purposes such as solar power.  The use of genetic engineering for food is controversial, depending on what definition  you accept (genetic engineering vs. genetic modification).  However, genetic engineering has its place if used in a responsible, sustainable and environmentally conscious manner.