Alternative Energy and Fuel for Cars

The Eco Friendly Way to Wash a Car

In the wake of the ongoing Gulf Oil disaster, alternative energy resources are being scrutinized with renewed interest. As the transportation sector consumes over 40 percent of world oil production, ridding us of our petroleum habit in that sector alone would go a long way to reducing our fossil fuel consumption and carbon emissions. Hybrids are the best known of the alternative vehicles, even though they are not really an alternative. They are more of a supplement, an intermediary step. They still burn fuel, just not as much.

Biofuels have been touted as a carbon-neutral fuel, as they just release the carbon they take up as plants. However, energy costs are very high to produce these ethanol fuels, and there is some debate about the ethics of taking crops like corn out of food production and putting them into fuel production when there are so many hungry people in the world.

Bio-diesel comes from a different source than conventional biofuels. Bio-diesel is typically recovered from used vegetable oil, though food crops like soy and canola are also grown to provide oil as well. Biodeisel can be burned in a normal diesel engine. However, biodiesel shares the ethical issue with other biofuels about taking land out of food production to produce energy.
Hybrid biofuel vehicles are certainly possible, and hybrid diesel vehicles are commercially available.

Electric cars have been around in one form or another for as long as there have been cars. They have all suffered from weight and range problems in comparison to cars powered by gasoline or diesel. Slower, heavier, and with almost uselessly short ranges, electric cars have been a pipedream for a long time. The latest generation of electric cars, though, are using battery packs with new high-density lithium batteries. In the case of the Tesla roadster, this gives it the performance of a sports car, with a range of nearly 400 kilometres. Other electric cars with similar performance levels are expected to be announced in the near future. Electric cars would likely recharge at home, thus transferring costs to the home electricity bill. Depending on how the home is powered, this would also affect the actual carbon cost of the vehicle. Charging is not a quick process, so any purchasers of these vehicles would have to keep the range and charge limits taken into account.

Though most people don’t think of them this way, fuel-cell-powered vehicles are simply an alternative to battery-operated electric vehicles. They just replace the battery with a hydrogen fuel cell. In many ways this fits a more conventional model of consumption, as vehicles pull up to a fuel station. Hydrogen is produced at a net energy loss, meaning it takes more energy to produce that hydrogen fuel than you can get out of it. If the energy is coming from a renewable resource, that is fine. If it is not, using hydrogen is no better than using coal to power your car.

Bio-digesters can produce methane from animal waste, and the methane can be used to fuel vehicles. However, it is not as effective a fuel as others, and requires the vehicle’s engine to be converted to run on methane.

The Indian auto company Tata Motors is producing a small car designed to run on compressed air. The car is expected to be very inexpensive to buy and to run. It would 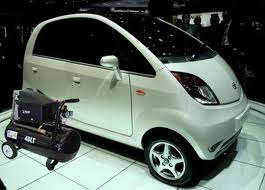 recharge from an electrically-powered compressor in the owner’s home, which fills a high-pressure tank on the car. Such a car gets air conditioning for free. Like battery-powered and fuel cell vehicles, the compressed air powered car transfers energy production to a central utility. And like hydrogen, the process requires a great deal more energy than you get out of it.

With more renewable power options coming into play at the central utility level, the various storage ideas (battery, fuel cell, compressed air) become more attractive as a method to decrease carbon production, and reduce our dependencies on fossil fuels. The various biofuel ideas, though, have ethical concerns associated with them that are hard to get past, at least while food crops are still being used to create the fuel.

The latest EV’s have shed many of their disadvantages (read 12 myths about electric vehicles) and if these cars are recharged at home via electricity produced from renewable sources such as wind and solar energy, then these vehicles become much more eco-friendly.  The biofuel food vs. fuel debate continues but second and third generation biofuels have a lower impact on the environment and do have their place.  Also see Top 10 renewable energy technology breakthroughs in 2010. While on the subject of cars,  read The Eco Friendly Way to Wash a Car.