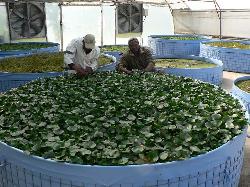 The Rhodes Zoology and Entomology Department has been awarded a R9 million contract by the Working For Water (WFW) Programme of the Department of Water and Environment to continue its vital research into biological methods of controlling some of South Africa’s worst invasive waterweeds.

South Africa loses nine percent of its precious water runoff to alien invasive species such as the water hyacinth, parrot’s feather, salvinia, water lettuce, and red water fern, according to Rhodes Entomology Professor Martin Hill who heads up the project.

These weeds not only drain the country’s water resources, but also clog and strangle its waterways, and contribute to the destruction of indigenous plant and other aquatic life.

The point of the programme is to reduce the invasiveness of these waterweeds through the use of biological agents to improve the quality and quantity of water in South Africa and protect indigenous species. “But the project is not just about research,” says Professor Hill. “It’s about implementation and making a practical contribution.”

In just seven days water hyacinth can double the area it occupies. “So if it occupies a hectare of water today, in a week’s time it would have taken over two hectares,” said Professor Hill.

Herbicides have a role to play, but only on small systems and in the short-term.
To make matters worse, while the waterweeds were exported to many parts of the globe in the late 1800s, its natural insect enemies remained behind in South America, allowing it to flourish and multiply in places like South Africa.

But Prof Hill and his team spent many years sourcing insects in the Amazon Basin and elsewhere that target these waterweeds and brought them to South Africa.

The insects are first quarantined and studied for at least five years under controlled conditions in a laboratory before release. Once it has been ascertained that these weevils, moths and bugs feed exclusively on the targeted waterweed, they are released with enormous success. “These insects are totally safe and pose no threat to indigenous or economic plant species,” emphasises Professor Hill.

Because of its brilliant results to date, this is the third round of funding Rhodes has received from the Department of Water Affairs’ Working for Water project.

It will enable the project to continue until 2013 with Rhodes contributing a further R5.1 million in researchers’ time and infrastructure.

The project focuses on the pre-release research and mass-rearing of the insects, implementation and post-release research. There are currently 350 sites where biological control is being successfully implemented.

Professor Hill has run similar successful projects to battle weeds such as the water hyacinth in other parts of Africa, including on Lake Victoria.

In South Africa huge bodies of water in Kwa Zulu Natal, the Eastern Cape, the Northern Cape and elsewhere have been almost cleared of waterweed by the project. The ecologically sensitive Blaaukrantz Pool near Bathurst where the endangered Eastern Cape Rocky fish breed was also cleared of red water fern by the programme.

Prof Hill emphasises that the insects won’t eradicate the weed altogether but get it down to an acceptable threshold where it is no longer draining water resources or damaging indigenous plant, fish and other life.

Prof Hill adds, “The research also allows for capacity building in terms of postgraduate bursaries, several school programmes and a programme that employs disabled people to help in the rearing of insects for distribution around the country. In addition, the main focus is to undertake fundamental research on an applied system that will not only result in research publications, but can also be implemented for the betterment of the environment in South Africa.”

A subsection of the research will also involve using biological agents to curb the explosion of a creeping cactus known as Pereskia aculeate. The cactus, which is also native to Central and South America, has invaded many of South Africa’s forests and coastal vegetation from Knysna to Kosi Bay.

Water conservation in South Africa requires a multi-disciplinary approach if we are avert the worst of the water crisis.  Alien waterweeds such as water hyacinth are are problem in Mpumalanga in certain dams and reservoirs and need to be periodically controlled with a combination of herbicides and biological agents (Primkop Dam near White River / Nelspruit has been successfully treated with the aforementioned method).  ‘Biological pollutants’ or exotic invasive species can wreak havoc to local ecosystems and can even trigger mass extinctions.