By admin on January 15, 2011 in acid mine drainage, Pollution

Johannesburg – Acidic mine water that has been bubbling out of an old ventilation shaft on the West Rand for the past year has now reached the Cradle of Mankind, and is believed to have caused the deaths of over 60 carp in a dam. 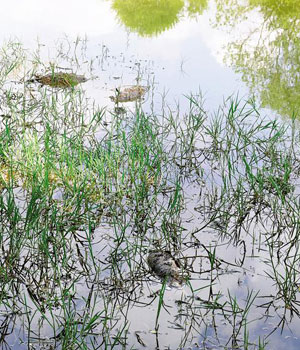 Fish found dead in a dam near the Cradle of Humankind are believed to have died as a result of acid mine water pollution. (Neil Norquoy, Beeld)

This is the opinion of Dr Francois Durand of the Department of Zoology at the University of Johannesburg, after environmental experts found the dead fish in an irrigation dam in the Blaauwbankspruit.

This stream runs from the Tweelopiespruit, which springs from the radioactive Robinson lake outside Randfontein. From here it runs through the Krugersdorp game reserve, “over” the Sterkfontein Caves, right through the Cradle of Mankind up to the Crocodile River, which runs into the Hartbeespoort Dam.

Neil Norquoy from Wild Cave Adventures found the dead fish on the farm Koelenhof on Thursday.

The farm is about 10km northeast of the place where millions of litres of acidic mine water has been leaking on the West Rand since last year.

The dam is situated about 3km northeast of the Sterkfontein Caves.

Durand said the pollution had spread from the old Rand Uranium goldmine on the West Rand and has now spread north to within the Cradle of Mankind.

Water specialist Garfield Krige agreed with Durand and said he believed the acidic mine water of the West Rand had reached the Hartbeespoort Dam “long ago”.

The heavy rains over the past two weeks have filled the underground mined-out pockets on the West Rand to such an extent that there are now about 40 million litres of sour mine water in the Tweelopiespruit each day.

Krige, who lives in the Cradle of Mankind, said stones in the area where the Blaaubankspruit flowed, are also coloured bright orange.

The whole shore area of the Tweelopiespruit is coloured dark orange.

Durand said that not only are the fossils in the Sterkfontein Caves being threatened by the acidic minewater, but “all life” in the world heritage site.

Samples of the fish were to be taken to Onderstepoort on Thursday for analysis.

It is ironic that man’s mining activities (that contribute to our civilization) now threaten the earliest proof of the beginning of civilization.  Johannesburg is on an acid water time bomb and it isn’t an easy problem to solve.  It is shocking to discover that this acid mine water has already reached Hartbeespoort Dam which has its own long-standing pollution issues.

Borehole water anywhere near possible acid mine drainage or other sources of pollution is potentially not safe; rainwater harvesting is an eco-friendly solution.