How can I improve my greywater system? 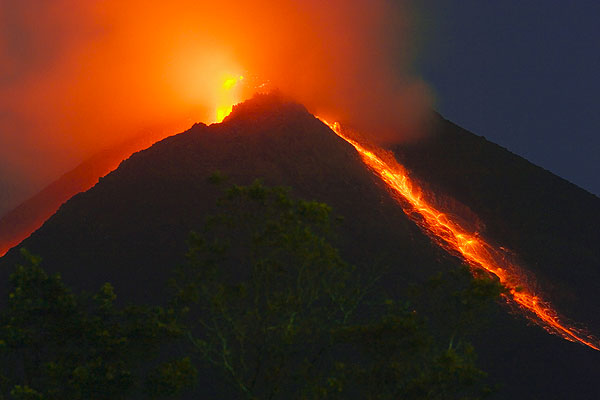 Explosive volcanoes such as Indonesia's Merapi (erupting here in 2006) have the potential to shift rain patterns.

Scientists have long known that large volcanic explosions can affect the weather by spewing particles that block solar energy and cool the air. Some suspect that extended “volcanic winters” from gigantic blowups helped kill off dinosaurs and Neanderthals. In the summer following Indonesia’s 1815 Tambora eruption, frost wrecked crops as far off as New England, and the 1991 blowout of the Philippines’ Mount Pinatubo lowered average global temperatures by 0.7 degrees F — enough to mask the effects of manmade greenhouse gases for a year or so.

Now, scientists have shown that eruptions also affect rainfall over the Asian monsoon region, where seasonal storms water crops for nearly half of earth’s population. Tree-ring researchers at Columbia University’s Lamont-Doherty Earth Observatory showed that big eruptions tend to dry up much of central Asia, but bring more rain to southeast Asian countries including Vietnam, Laos, Cambodia, Thailand and Myanmar — the opposite of what many climate models predict. Their paper appears in an advance online version of the journal Geophysical Research Letters.

The growth rings of some tree species can be correlated with rainfall, and the observatory’s Tree Ring Lab used rings from some 300 sites across Asia to measure the effects of 54 eruptions going back about 800 years. The data came from Lamont’s new 1,000-year tree-ring atlas of Asian weather, which has already produced evidence of long, devastating droughts; the researchers also have done a prior study of volcanic cooling in the tropics. “We might think of the study of the solid earth and the atmosphere as two different things, but really everything in the system is interconnected,” said Kevin Anchukaitis, the study’s lead author. “Volcanoes can be important players in climate over time.”

Large explosive eruptions send up sulfur compounds that turn into tiny sulfate particles high into the atmosphere, where they deflect solar radiation. Resulting cooling on earth’s surface can last for months or years. (Not all eruptions will do it; for instance, the continuing eruption of Indonesia’s Merapi this fall has killed dozens, but this latest episode is probably not big enough by itself to effect large-scale weather changes.) As for rainfall, in the simplest models, lowered temperatures decrease evaporation of water from the surface into the air; and less water vapor translates to less rain. But matters are greatly complicated by atmospheric circulation patterns, cyclic changes in temperatures over the oceans, and the shapes of land masses. Up to now, most climate models incorporating known forces such as changes in the sun and atmosphere have predicted that volcanic explosions would disrupt the monsoon by bringing less rain to southeast Asia–but the researchers found the opposite.

The researchers studied eruptions including one in 1258 from an unknown tropical site, thought to be the largest of the last millennium; the 1600-1601 eruption of Peru’s Huaynaputina; Tambora in 1815; the 1883 explosion of Indonesia’s Krakatau; Mexico’s El Chichón, in 1982; and Pinatubo. The tree rings showed that huge swaths of southern China, Mongolia and surrounding areas consistently dried up in the year or two following big events, while mainland southeast Asia got increased rain. The researchers say there are many possible factors involved, and it would speculative at this point to say exactly why it works this way.

“The data only recently became available to test the models,” said Rosanne D’Arrigo, one of the study’s coauthors. “Now, it’s obvious there’s a lot of work to be done to understand how all these different forces interact.” For instance, in some episodes pinpointed by the study, it appears that strong cycles of the El Niño-Southern Oscillation, which drives temperatures over the Pacific and Indian oceans and is thought to strongly affect the Asian monsoon, might have counteracted eruptions, lessening their drying or moistening effects. But it could work the other way, too, said Anchukaitis; if atmospheric dynamics and volcanic eruptions come together with the right timing, they could reinforce one another, with drastic results. “Then you get flooding or drought, and neither flooding nor drought is good for the people living in those regions,” he said. The study also raises questions whether proposed “geoengineering” schemes to counteract manmade climate change with huge artificial releases of volcanism-like particles might have complex unintended consequences.

Ultimately, said Anchukaitis, such studies should help scientists refine models of how natural and manmade forces might act together to in the future to shift weather patterns — a vital question for all areas of the world.

Volcanoes have the potential to cause global environmental problems, rivaling man-induced climate changing activities.  Natural environmental disasters coupled with the effects of human impacts can be devastating.  Flooding, droughts, extreme temperatures, hurricanes and other unusual weather patterns are a warning of uncertain times ahead.  The global water crisis and energy crisis will probably worsen and we should be prepared and become water- and energy self-sufficient.  Water conservation measures such as rainwater harvesting and grey water recycling, and renewable energy such as solar power are becoming accessible to homeowners in South Africa.