Military Forges Ahead On [Green] Tech

10 No-Brainer Ways to Use Water Wisely. Plus, a Bonus… 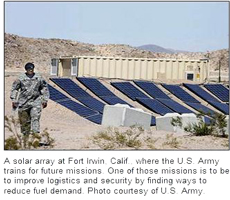 Yes, It’s the military again, this time blazing the trail for alternative energy. It’s rushing to deploy solar energy equip on the battlefields of Afghanistan.

No they are not solely green-conscious. It costs them a mint to transport fossil fuel to the land-locked country.

This is great news for all Americans! Once the military gets interested in a technology, the costs can only come down. Think the microchip NASA wanted them for Minuteman missiles & the space program. In 1961 the cost was $32/microchip. In 1971, $1.25. Now it’s something less than a nickel. Look at the IBM computer. $78,000, but the Social Security Agency & Selective Service wanted them. You know what a computer costs now. The highway system. High School math & science funding (to keep up with the Ruskies).

Think ahead, people! This is a way to get solar technology into the hands of all of us.

The U.S. Army Corps of Engineers recently selected the team of ACCIONA Solar Power and the Clark Energy Group to develop a massive solar energy project. The first phase alone consists of five sites over 21 square miles, which will produce a cumulative 500 megawatts (MW) of power at the Fort Irwin military complex, located in the Mojave Desert of California, an area with nearly the most hours of sunlight in the U.S. annually. In specific, Fort Irwin is located halfway between Los Angeles, which is approximately 245 km to the southwest, and Las Vegas, NV, nearly 290 km to the northeast. The base is the U.S. Army`s largest training ground and also houses NASA`s Goldstone Deep Space Communications center. This effort is in response to a federal mandate that requires the U.S. Army to reduce its energy consumption by 30 percent by 2015 with respect to 2003 levels and to cover 25 percent of its energy consumed with clean, renewable energy by 2025, which is analogous to the renewable energy portfolio standard for states.

The US military are also changing over to non-toxic, lead-free ‘green’ ammunition- a good thing, especially when one considers the millions of practice rounds that are shot into earth backstops each year.  Military technology, although usually far from benign, has resulted in some wonderful benefits to civilians.  Solar energy is developing and improving on many fronts- increased efficiency and reduced costs.  Currently, solar power for homes is probably the most accessible form of alternative, clean energy available.  Solar water geysers alone can reduce household electricity bills by as much as 50%!