The Future is Looking Bright for Solar Power Initiatives 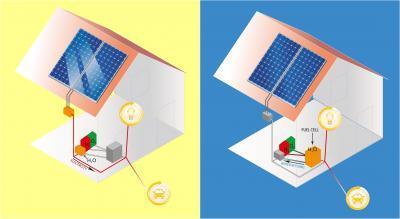 A new catalyst could help speed development of inexpensive home-brewed solar energy systems for powering homes and plug-in cars during the day (left) and for producing electricity from a fuel cell at night (right).

The era of personalized energy systems — in which individual homes and small businesses produce their own energy for heating, cooling and powering cars — took another step toward reality as scientists reported discovery of a powerful new catalyst that is a key element in such a system.

They described the advance, which could help free homes and businesses from dependence on the electric company and the corner gasoline station, at the 240th National Meeting of the American Chemical Society, held in Boston.

“Our goal is to make each home its own power station,” said study leader Daniel Nocera, Ph.D. “We’re working toward development of ‘personalized’ energy units that can be manufactured, distributed and installed inexpensively. There certainly are major obstacles to be overcome — existing fuel cells and solar cells must be improved, for instance. Nevertheless, one can envision villages in India and Africa not long from now purchasing an affordable basic system.”

Such a system would consist of rooftop solar energy panels to produce electricity for heating, cooking, lighting, and to charge the batteries on the homeowners’ electric cars. Surplus electricity would go to an “electrolyzer,” a device that breaks down ordinary water into its two components, hydrogen and oxygen. Both would be stored in tanks. In the dark of night, when the solar panels cease production, the system would shift gears, feeding the stored hydrogen and oxygen into a fuel cell that produces electricity (and clean drinking water as a byproduct). Such a system would produce clean electricity 24 hours a day, seven days a week — even when the sun isn’t shining.

Nocera’s report focused on the electrolyzer, which needs catalysts — materials that jumpstart chemical reactions like the ones that break water up into hydrogen and oxygen. He is with the Massachusetts Institute of Technology in Cambridge, Mass. Good catalysts already are available for the part of the electrolyzer that produces hydrogen. Lacking, however, have been inexpensive, long-lasting catalysts for the production of oxygen. The new catalyst fills that gap and boosts oxygen production by 200-fold. It eliminates the need for expensive platinum catalysts and potentially toxic chemicals used in making them.

The new catalyst has been licensed to Sun Catalytix, which envisions developing safe, super-efficient versions of the electrolyzer, suitable for homes and small businesses, within two years.

The National Science Foundation and the Chesonis Family Foundation provided funding for this study. Nocera did the research with post-doctoral researcher Mircea Dinca and doctoral candidate Yogesh Surendranath. The U.S. Department of Energy’s Advanced Research Projects Agency has recently awarded the team with a grant, which it plans to use to search for related compounds that can further increase the efficiency of its electrolyzer technology. The team hopes that nickel-borate belongs to a family of compounds that can be optimized for super-efficient, long-term energy storage technologies.

Becoming energy and water self-sufficient is an ideal goal in these uncertain times with both an energy crisis and water crisis looming.  Green technology can be expensive and complex but sometimes simple solutions are better.  Water Rhapsody and Yes Solar combine to offer holistic sustainable living solutions that can help you go ‘off-grid’.  Our  WWF Award-winning water systems are designed to operate automatically without the need for drastic lifestyle changes.  Water conservation is a necessity as South Africa faces severe water scarcity.  We supply and install rainwater harvesting systems (see rainwater FAQ), grey water recycling systems (see greywater FAQ) and water-saving devices for swimming pools and toilet systems (see product demo).  Our water systems can be retrofitted or built into new buildings and can be adapted to small households or large business blocks, lodges & hotels and schools.  Yes Solar (our solar energy division) markets and supplies German-made Solsquare solar water heating systems  that are installed by Solsquare-accredited solar installers (eligible for Eskom rebates).  Solar energy, via photovoltaic solar panels and solar geysers, is ideal for sunny South Africa (and especially the Mpumalanga & Limpopo Lowveld- Nelspruit has one of the highest irradiation rates in the country).  As water storage is core to many of our water systems we also offer rainwater tanks and water tanks of all shapes and sizes (we are authorized JoJo Water Tank dealers and Atlas Plastics water tank suppliers).  When ordering  your water tank, don’t forget that the design of water tank stands and bases is very important (we supply JoJo tank stands too).  Contact us for a free quote on a water system, solar energy system or water tank.