Wetlands: their Importance and Function

Engineers report progress in rescuing a 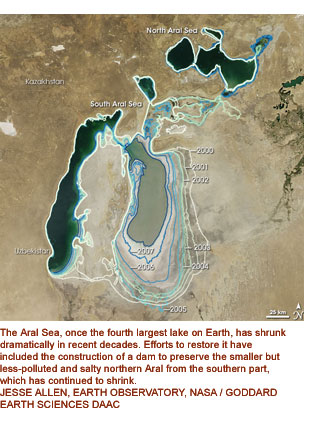 Aralsk, Kazakhstan, is surrounded by barren desert, but the city could become a thriving port if the Aral Sea makes its anticipated comeback.

“A billboard outside Aralsk proclaims ‘Good News — the Sea is Coming Back.’ There is a lot of optimism among the people,” reports Joop Stoutjesdik, task team leader of the World Bank’s Syr Darya and Northern Aral Sea Project.

The Aral Sea, situated in Central Asia between Kazakhstan and Uzbekistan, was the world’s fourth-largest inland body of water in 1960, according to the European Space Agency. But the Aral lost more than 70% of its water due to drainage for irrigating parched farmland.

By 1990, the Aral had shriveled into a remnant northern sea within Kazakhstan and a southern one on the Kazakh-Uzbek border. Each sea was more than 20 meters lower than the original.

The drainage lay bare more than 40,000 square kilometers of its sea bed, whose exposed salts and sands fueled sandstorms that caused fatal illnesses and erratic weather.

The remaining water became so unnaturally saline that most of the fish and fauna died. Drinking-water supplies became scarce, and tens of thousands of fishing, agriculture, and service-sector jobs vanished.

Better times may be ahead, however. Between 2005 and 2007, Kazakhstan and the World Bank funded extensive restoration projects for the northern sea: a 13-kilometer Kok-Aral dike to block flow of its water into the southern sea; hydraulic facilities along the Aral tributary Syr Darya river to increase its capacity and channel more water into the sea basin; and a dam and canal from the Syr Darya to restore fishing lakes, which would serve as hatcheries for new fish populations.

The northern sea has since risen four meters and increased its surface area by 13%. Its salinity has been reduced by more than two-thirds. New water-supply systems bring better-quality drinking water to seaside villages. Seven species of fish have returned, according to the World Bank. The sea’s recovery is also improving the climate.

“During the last years there were rains in April, May, and June, while before, the last rains would fall in March,” Stoutjesdik adds. “There is more grass for livestock. Dust storms are fewer. Swans, ducks, and geese are returning.”

The southern sea is still shrinking, however. The European Space Agency expects it to dry out completely by 2020.

Amanda Wooden, Bucknell University environmental science professor, says that the best-case scenario is that the southern sea stabilizes around its present levels.

“This is a significant loss for the region and the world,” she says.

She notes that this is troubling for the human communities around the sea basin.

“A decline in health conditions and the agricultural sector could have ramifications for Uzbekistan’s stability,” she says. “The broader region will be impacted by climatic changes.”

The southern sea’s western side, at least, could be salvaged if engineers dammed it. Reforming the region’s irrigation systems would also help, but Wooden does not see either approach happening.

“These steps have not been taken and do not seem likely to be followed soon enough,” says Wooden. But even a partial recovery is better than none, she concludes. — Rick Docksai

The Aral Sea has suffered the consequences of unsustainable agricultural practices.  Draining the lake (especially the southern lake) and diverting  river in-flow has resulted in local climate changes. The salt-dust storms have negatively affected the region’s communities as well as the fauna and flora. Socio-economic aspects have also been impacted.  This is an example of how man’s interference in an ecosystem can cause compounded environmental damage and ecologically irreversible changes.  On a positive note, it is also an example where the disastrous effects of our actions have been recognised and some of the damaged ecosystems are being rehabilitated.  In the past it was difficult to see how multiple environmentally damaging actions by small communities or individuals could produce the cumulative effect that we now see.  Modern technology has allowed us to see ourselves from a global perspective and hopefully this will alert us to similar ecological collapses before it’s too late.  As an individual, you can conserve water and the environment by installing water conservation systems such as those offered by Water Rhapsody Mpumalanga.  See the product demo for more information on rainwater harvesting and grey water recycling, as well as other innovative water saving devices.