Seattle’s Bullitt Center is being heralded as the greenest, most energy-efficient commercial office building in the world. 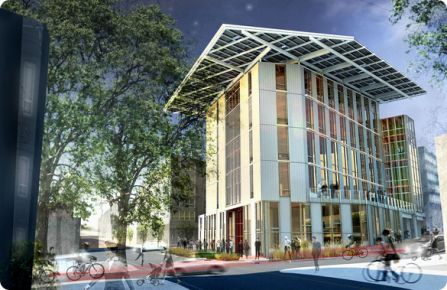 It’s not that the six-story, 50,000-square-foot building is utilizing never-before-seen technology. But it’s combining a lot of different existing technologies and methods to create a structure that’s a showpiece for green design–and a model for others to follow.

A project of the Bullitt Foundation, a Seattle-based sustainability advocacy group, the Bullitt Center has an incredibly ambitious goal. From the website:

The goal of the Bullitt Center is to change the way buildings are designed, built and operated to improve long-term environmental performance and promote broader implementation of energy efficiency, renewable energy and other green building technologies in the Northwest.

“The most unique feature of the Bullitt Center is that it’s trying to do everything simultaneously,” says Bullitt Foundation President Denis Hayes. “Everything” includes 100% onsite energy use from solar panels, all water provided by harvested rainwater stored in rain water tanks, natural lighting, indoor composting toilets, a system of geothermal wells for heating, and a wood-framed structure (made out of FSC-certified wood).

These are all positive things for the Bullitt Center and its future inhabitants–they may even meet the goals of the ultra-tough Living Building Challenge–but they could also change the way buildings are designed elsewhere.

Think about the Bullitt Center’s location. When I spoke to Hayes, he told me that it was 42 degrees in Seattle–cloudy, of course–and it had been raining hard for the last four days. He notes that most people would laugh at the notion of a building in the city getting all of its energy from solar power. “If you were to choose the single location in the United States where solar makes the least sense, it’s arguably Seattle,” he admits. “Because though you have less sun in Alaska, you have really expensive electricity. In Seattle we have a combination of very little sunlight and really cheap electricity.”

That won’t necessarily be the case for long; Seattle’s cheap and clean power comes from its dams built in the 1930s, but dirtier sources will likely start coming online as electricity needs grow. And if the environmental impacts of coal and other dirty energy sources make them politically unattractive (still waiting on that one to happen), building designers might opt for solar. Says Hayes: “If you can do it for a six-story building in Seattle, that sends a powerful message to Santa Fe and Los Angeles.”

Solar installations don’t usually face big legislative hurdles. But rainwater harvesting is a little more difficult. Hayes believes that the Bullitt Center, which was designed by the Miller Hull Partnership, is first conventional office building in the U.S. to get all of its water from rain–specifically, from a cistern in the basement that can hold 56,000 gallons of water. Tenants are expected to use about 500 gallons of water per day, so the tank should theoretically be able to keep the building hydrated during a 100-day drought (not that that’s likely to happen in Seattle anytime soon).

Rainwater harvesting was actually illegal in Washington state–as it is in many places in the Western U.S.–up until a couple years ago. “You didn’t have the right to build a dam much less a cistern to save [water],” explains Hayes. “There was this weird moment in time where it was against the law to use rainwater on your roof but the government of Seattle would give you rain barrels for free to capture water.”

Rainwater capturing isn’t flat-out illegal anymore, but Bullitt still had to face some hurdles. “You can do a lot of things in your own house, but we had to set up an independent water district. The city of Seattle is a water district,” laughs Hayes. Bullitt implemented a strict water treatment system that filters bacteria, viruses, and ultraviolet radiation before chlorinating the water in pipes (required by federal regulations). When water reaches the tap, activated charcoal filters in the faucets clean out chlorine–necessary since chlorine is a red-listed substance. The process is a little much for most building designers and architects to deal with at the moment, but as droughts around the country increase in the coming years, it’s not impossible that rainwater capturing could become required by law. If that happens, everyone will look at the Bullitt Center as an example.

Some of the Bullitt Center’s features have made it easier for others to follow in their footsteps. The Bullitt Foundation took on the challenging goal of constructing a building without using any red-listed materials–materials deemed harmful by the Living Building Challenge. The building materials industry is notoriously opaque, so Bullitt often had to call companies directly to ensure that their products didn’t contain, say, pthalates or polyvinyl chloride (PVC).” In the end, we were making some acts of faith that people are not lying,” says Hayes. “We did the very best job that we could, and we are reasonably confident that it’s the very best job anyone has done today.”

Bullitt even convinced Prosoco, a company that makes water sealants that are sprayed on the outside of buildings, to create a new formulation of its product that doesn’t contain pthalates–or cost any more than the old version. Sometimes, it seems, all you have to do is ask. In order to make it easier for other buildings to follow suit, Bullitt plans to publish its findings online.

The foundation also made it easier for other buildings on the West Coast to get high-performing windows from Schueco, a German company. “We got the manufacturer to make windows with wonderful performance characteristics, and a local company got an exclusive license to make them for the West Coast,” says Hayes. Now that manufacturer has multiple orders for the windows in the region.

Other buildings might be open to using Schueco windows and banning red-listed materials, but overcoming society’s squeamishness towards composting toilets will prove more difficult. Bullitt’s composting toilets come with air compressors, a soap solution, and water. Once a toilet has been used, waste migrates through the building and down into one of its 10 composters located in the basement. The waste decomposes with help from wood shavings and water. Tenants never have to smell the aftermath– at least, no more than usual–of their coworkers’ bathroom trips.

“We try to put a mark that’s way out there that we don’t expect others to immediately replicate. The things I think we can get people to replicate provide meaningful, tangible benefits to tenants,” says Hayes.

The Bullitt Center is so out there that the Seattle city council had to pass a special Living Building Ordinance just so that it could stray from the city’s prescriptive design standards. Now up to 12 buildings competing in the Living Building Challenge will be allowed to skirt building requirements over the next three years in the name of dramatically exceeding performance standards.

Hayes stresses that what worked for Bullitt won’t work for every building. A skyscraper couldn’t have a wood frame, for example (see PNC’s headquarters for an example of an ultra-green skyscraper). And what’s appropriate for Seattle isn’t necessarily appropriate for other parts of the world. “One of our objectives from the start was to herald the beginning of a return to regionally appropriate architecture,” says Hayes.

Tenants will begin moving into the Bullitt Center in January 2013.

It is unfathomable to many non-Americans that, until recently, rainwater harvesting was illegal in certain districts and that, currently there are “still some restrictions”.  Ironically, as the above article states, it may become mandatory for new buildings to incorporate rainwater harvesting systems!  Fortunately, there are no such rainwater harvesting restrictions in South Africa and businesses and homeowners are encouraged to install rain water tanks wherever possible.  Click on the links below to find your ideal jojo water tank, jojo rainwater tank, jojo tank stand, jojo septic tank or other quality product manufactured by JoJo Tanks South Africa.