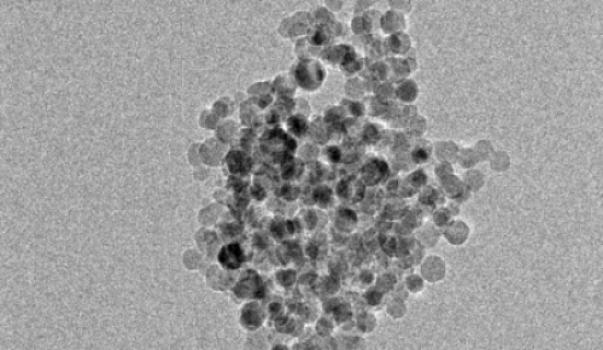 Super-small particles of silicon react with water to produce hydrogen almost instantaneously, according to University at Buffalo researchers.

In a series of experiments, the scientists created spherical silicon particles about 10 nanometers in diameter. When combined with water, these particles reacted to form silicic acid (a nontoxic byproduct) and hydrogen — a potential source of energy for fuel cells.

The reaction didn’t require any light, heat or electricity, and also created hydrogen about 150 times faster than similar reactions using silicon particles 100 nanometers wide, and 1,000 times faster than bulk silicon, according to the study.

The findings appeared online in Nano Letters on Jan. 14. The scientists were able to verify that the hydrogen they made was relatively pure by testing it successfully in a small fuel cell that powered a fan.

“When it comes to splitting water to produce hydrogen, nanosized silicon may be better than more obvious choices that people have studied for a while, such as aluminum,” said researcher Mark T. Swihart, UB professor of chemical and biological engineering and director of the university’s Strategic Strength in Integrated Nanostructured Systems.

“With further development, this technology could form the basis of a ‘just add water’ approach to generating hydrogen on demand,” said researcher Paras Prasad, executive director of UB’s Institute for Lasers, Photonics and Biophotonics (ILPB) and a SUNY Distinguished Professor in UB’s Departments of Chemistry, Physics, Electrical Engineering and Medicine. “The most practical application would be for portable energy sources.”

Swihart and Prasad led the study, which was completed by UB scientists, some of whom have affiliations with Nanjing University in China or Korea University in South Korea. Folarin Erogbogbo, a research assistant professor in UB’s ILPB and a UB PhD graduate, was first author.

Swihart said the discrepancy is due to geometry. As they react, the larger particles form nonspherical structures whose surfaces react with water less readily and less uniformly than the surfaces of the smaller, spherical particles, he said.

Though it takes significant energy and resources to produce the super-small silicon balls, the particles could help power portable devices in situations where water is available and portability is more important than low cost. Military operations and camping trips are two examples of such scenarios.

“It was previously unknown that we could generate hydrogen this rapidly from silicon, one of Earth’s most abundant elements,” Erogbogbo said. “Safe storage of hydrogen has been a difficult problem even though hydrogen is an excellent candidate for alternative energy, and one of the practical applications of our work would be supplying hydrogen for fuel cell power. It could be military vehicles or other portable applications that are near water.”

“Perhaps instead of taking a gasoline or diesel generator and fuel tanks or large battery packs with me to the campsite (civilian or military) where water is available, I take a hydrogen fuel cell (much smaller and lighter than the generator) and some plastic cartridges of silicon nanopowder mixed with an activator,” Swihart said, envisioning future applications. “Then I can power my satellite radio and telephone, GPS, laptop, lighting, etc. If I time things right, I might even be able to use excess heat generated from the reaction to warm up some water and make tea.”

This is yet another example of how important water is to us and how water and energy are linked.  Apart from the obvious uses and daily water requirements, water could also be the fuel of the future, see concept vehicle that harvests rainwater for fuel. Water is an integral part of all life on Earth and its availability or non-availability has a huge impact on human social, political, physical and health issues.  Water tariffs are rising rapidly but there is a way of mitigating the high cost of water – rainwater harvesting – virtually anybody with a roof, gutter, a downpipe and a water tank or rain barrel can harvest rain water and thereby obtain free water.  Choose rain water tanks carefully; not all ‘plastic’ water tanks are made equal.  We recommend high quality water tanks and other products manufactured by JoJo Tanks (South Africa) that carry a 5 year guarantee and are widely available throughout South Africa.  Click on the links below to find your ideal jojo water tank, jojo rainwater tank, jojo steel tank stand or other JoJo Tanks product.