According to one report, “up to 40 percent of China’s rivers were seriously polluted” and “20 percent were so polluted their water quality was rated too toxic even to come into contact with.” 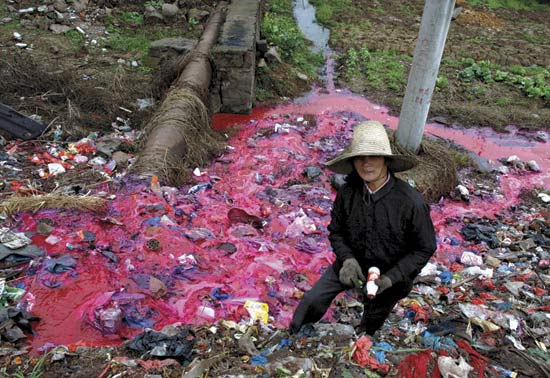 In recent weeks, Chinese and western media have been all atwitter over the shocking levels of air pollution in Beijing and a number of other Chinese cities. But it really shouldn’t be all that shocking.

After all, in 2007, the World Bank and China’s own State Environmental Protection Administration (now the Ministry of Environmental Protection) found that that as many as 750,000 people die prematurely in China annually from respiratory disease related to air pollution. And more recently, Greenpeace Beijing reported that in 2011 in four major cities, more than 8,000 people died prematurely as a result of just one pollutant, PM 2.5. Anyone who spends any time in Beijing knows that the city has not yet found a way to tackle the myriad sources of air pollution from construction to cars to coal.

As frightening as the country’s smog-filled skies might be, the country’s water pollution is easily as alarming.  According to one 2012 report, “up to 40 percent of China’s rivers were seriously polluted” and “20 percent were so polluted their water quality was rated too toxic even to come into contact with.” Part of the explanation may rest in the “estimated 10,000 petrochemical plants along the Yangtze and 4000 along the Yellow Rivers.” (And the Yellow and Yangtze are not even the most polluted of China’s seven major rivers.) On top of whatever polluted wastewater might be leaching or simply dumped into China’s rivers from these factories, the Ministry of Supervision reports that there are almost 1,700 water pollution accidents annually. The total cost in terms of human life: 60,000 premature deaths annually.

While the macro picture is concerning, even more worrying is that individual Chinese don’t know whether their water is safe to drink or not. A Chinese newspaper, the Southern Weekly, recently featured an interview with a married couple, both of whom are water experts in Beijing (available in English here). They stated that they hadn’t drunk from the tap in twenty years, and have watched the water quality deteriorate significantly over just the past few years, even while state officials claim that more than 80 percent of water leaving treatment facilities met government standards in 2011.

It is difficult to get the straight story. According to one report by Century Weekly, there are a number of reasons for differing assessments of the country’s water quality: 1) the frequency of testing at treatment plants is too low, and only 40 percent of the treatment plants in China’s thirty-five major cities have the capacity to test for all 106 indicators in any case; 2) there are only a few independent water-quality monitoring bureaus, and most water testing is done in-house by the same water-treatment plant being evaluated; 3) there is weak transparency from local governments as to the results of the tests; and 4) no water testing accounts for the contamination that occurs from the aging and degraded pipes through which the water is transmitted to Chinese households.

China’s environmental challenges are long in the making, not simply a function of the past thirty years of reform. As one reporter has noted, Beijing in the 1950s transformed from a city that “did not produce even pencils” to one that boasted “700 factories and 2000 blast furnaces belching soot in the air.” In his 1991 book Environmental Management in China, QuGeping, China’s first director of the country’s National Environmental Protection Agency, further commented about that time: “The environmental situation quickly deteriorated. A lot of places were polluted by either smog, sewage waters or rubbish. Biological resources, forests in particular, were seriously damaged, causing several losses to the ecosystem. There was extensive destruction of the natural environment of our country.”

In the 1950s, China, like other countries, neither understood well nor had the capacity to deal effectively with the environmental and health challenges its rapid development was creating. Today, however, China has both the knowledge and the capability. In the midst of the recent air pollution crisis, Premier-elect Li Keqiang said it would take time to address the air pollution problem: “There has been a long-term buildup to this problem, and the resolution will require a long-term process. But we must act.”  In the meantime, the Chinese people can only wear their masks, buy their bottled water, and hope they are not in this year’s batch of pollution-related casualties.

Many people all over the world distrust municipal water supplies, in many cases, with good cause (as in China).  However, turning to commercial bottled water is not environmentally friendly (and some bottled water is purported to be of lower quality than tap water in some cases).  Harvesting rainwater is a solution to obtaining water that you can trust.  Rainwater can be stored in water tanks and can be used for washing, laundry, flushing toilets, filling swimming pools, etc.  Rainwater can also be used for drinking water but we always recommend that it be appropriately filtered in case it has picked up contaminants from the roof surface and gutters.  Choosing the right water tank is also important- choose water tanks that are made with a food-grade plastic lining so that the water stays fresher for longer and algae growth is inhibited.  We recommend the high quality water tanks manufactured by JoJo Tanks South Africa.  Click on the links below to find your ideal JoJo water tank, JoJo rainwater tank, JoJo tank stand, JoJo septic tank or other JoJo Tanks product.