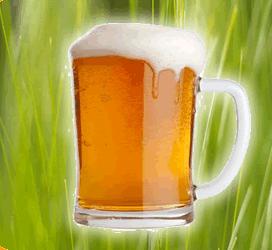 We might associate green beer with St. Patrick’s Day, but for environmentally conscious breweries, green takes on a whole new significance. If you’re looking to tipple sustainably, it turns out there are plenty of eco-friendly options at the liquor store.

Brewing beer and fermenting wine, like most other food processing, uses a lot of energy at all stages, from the water used to grow the ingredients to the fuel used to transport the product to market. There are many points throughout the process where companies have found ways to cut down on their energy usage.

Here, from International Business Times, is a sampling of the eco-conscious brewers and vintners working to sustain beer and wine-making for future generations to enjoy:

The Colorado-based outfit New Belgium Brewery, maker of beers like Fat Tire, has an enviable corporate ethic: Employees are given a cruiser bicycle after one year of employment and sent on an all-expenses-paid trip to Belgium after five years. The company is serious about going green, providing constant measurements of its waste and sustainability efforts online.

The company has calculated that the carbon footprint of a single six-pack of Fat Tire is a little over 3,000 grams of carbon dioxide equivalents. For comparison, a 2006 report from France’s environmental agency found that the average carbon foot print of a pair of jeans — which represents the cultivation of cotton, transportation of material, manufacturing the jeans, washing the jeans over four years and disposing them — is about 4,000 grams of carbon dioxide equivalent.

In 2007, New Belgium found that the largest portions of Fat Tire’s carbon footprint came from the electricity used by retail stores in refrigeration, followed by the transportation of glass and malt. Together, those three sources accounted for nearly 70 percent of the emissions in a six-pack of Fat Tire.

While New Belgium can’t control how retail stores draw power, it has been cutting its carbon footprint on the production side in several different ways.

The company has already met its goal of recycling 99 percent of its waste in 2009, thanks to bringing its cardboard packaging system in-house.

New Belgium started a brown-bottle recycling program that provides bars and restaurants with a bin to chuck amber glass in. The brewery also hosts a bicycle event called the Tour de Fat, which raises money for environmental causes and encourages people to ride bicycles in lieu of car travel.

Fort Collins, Colo., turns out to be a hotbed of eco-conscious brewing. New Belgium’s neighbor, Odell Brewing, gets about a quarter of its electricity from 384 solar panels on the brewery’s rooftop. The remainder comes from wind, thanks to a surcharge on Odell’s electricity bill that funds wind-power development. The company also uses biodiesel delivery trucks.

To reduce its energy use, Odell turns off part of its glycol chilling system — which keeps various components of the fermenting system cool — when the local electric grid hits peak demand. Odell also uses big fans in its production area to keep the brewery cool in the summer and warm in the winter.

Green brewing isn’t just a Colorado trend. The Fish Brewing Company in Olympia, Wash., has a line of organic beers made with all-organic barley.

“Industrial fertilizers and pesticides in conventional agriculture don’t just go away with the harvest. Some seep into the ground, run with the rain, and eventually flow into streams, rivers, lakes and bays,” the company says. “They eventually flow into the water: the salmon’s water, your water and your beer’s water.”

Eventually, the brewery hopes all of its Fish Tale beers will be made with organic ingredients.

Earlier this month, Brewery Vivant in Grand Rapids, Mich., became one of the first certified green breweries, with a stamp of approval from the Green Building Certification Institute according to the guidelines recommended by the Leadership in Energy and Environmental Design, or LEED, rating scale.

Brewery Vivant earned its LEED certification for a number of features, including high-efficiency heating and cooling units and a rainwater runoff capturing cistern to reduce the impact on Grand Rapids’ wastewater treatment plant. The brewery’s building itself is “recycled,” converted from a former funeral home.

Even the bigger players are making efforts to reduce their waste and energy use — Anheuser-Busch’s decision to shrink its beer-can lid size in 2004 and 2005 reduced its yearly use of aluminum by 40 million pounds. Several of the Budweiser maker’s breweries use the same tactics as their craft beer cousins, using biodiesel fuel, solar and wind power.

Across the pond, English brewer Adnams Southwold has taken all sorts of measures to reduce its carbon footprint.

In 2007, Adnams reduced the weight of its 500-milliliter bottles from 455 grams to 299 grams, cutting down on its glass usage. In 2008, the brewery produced East Green, the first carbon-neutral beer in the U.K.

Of course, going green isn’t limited to beer lovers. Wineries have also embraced sustainability to enhance both their bottom line and reduce their environmental impact.

Stratus Winery in Ontario was LEED-certified in 2005, the first winery in the world to earn that mark of sustainability. The Canadian vintners used recycled materials to build their winery and use geothermal heating and cooling to reduce their energy use. Stratus’ parking lot is also paved with a particular stone that reduces heat caused by reflected light.

Figuring out the most sustainable move to make isn’t always easy. Some wineries have chucked corks in favor of screwcaps, which eliminates the taint caused by corks contaminated with a compound called trichloroanisole. Cork taint can give wine a musty or nasty taste, resulting in waste.

But the pro-cork side argues that screwcaps are too asphyxiating and can prevent wines from “breathing,” which traps sulfur-containing compounds that give wine the taste of rotten eggs. Cork taint or screwcap taint is hard to predict, though, thanks to the complex chemistry going on inside a bottle of wine, so the jury’s still out on which wine closure is greener.

So next time you’re hankering for a nice brew or vintage, remember, there’s more than one way to drink responsibly.

Another way to drink (environmentally) responsibly is to choose drinks contained in returnable/reusable bottles/containers.  This reduces the waste and is probably preferrable, even if you religiously keep your non-reuseable containers for recycling.  Returnable containers have a value and they also discourage the ‘throw-away’ culture that is predominant in most societies.  There are certain breweries that make use of rainwater harvesting tanks and rainwater for their products; support these companies where possible.