The physical evidence of water scarcity can be found in increasing magnitude around the world, affecting rich and poor countries alike. Nearly three billion people live in water scarce conditions (over 40 percent of the world’s population), and this situation could worsen if current growth trends continue. 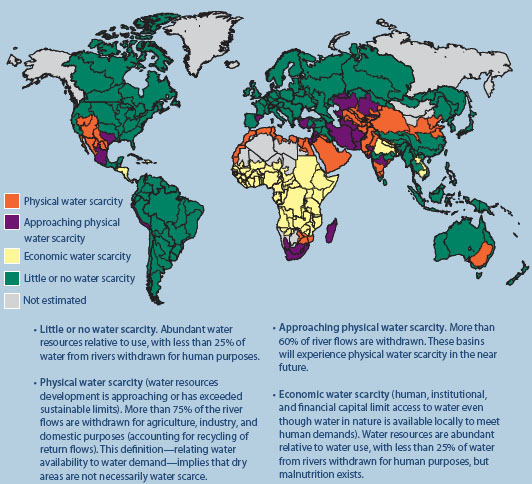 Water scarcity is not a factor of absolute quantity; it occurs frequently in both dry and moist climates. Rather, it is a relative concept comparing the availability of water to actual use. Desert regions, for example, do not classify as water scarce if demand for water is low. However, scarcity may exist in water-abundant areas if there is heavy population pressure, excessive pollution, or unsustainable consumption levels. Together, these forms of physical water scarcity affect every continent and approximately one-fifth of the world population.

In the United States and Europe, the average individual uses between 200 and 600 liters of water per day, compared to the 20 liters deemed to be the minimum daily requirement for drinking, washing, cooking and sanitation. Such unsustainable consumption levels have led to localized areas of water scarcity and significantly altered freshwater ecosystems. The massive Colorado River in the United States, which feeds the otherwise desert-like cities of Los Angeles, San Diego, and Las Vegas as well as millions of agricultural fields, now runs dry before reaching the ocean. As a consequence, the Colorado River Delta, which once supported plentiful plant and animal life, is now significantly diminished.

On the other hand, economic water scarcity occurs when water resources are abundant relative to water use, but insufficient infrastructure or financial capacity prevents people from accessing the water they need. This dilemma plagues an additional 1.6 billion people worldwide, predominantly the rural poor and particularly in Africa. For this reason, additional investment in the water sectors of developing countries could play a transformative role in poverty alleviation.

Slum dwellers, for example, typically pay five to 10 times more per unit of water than do people with piped water, and in rural households, women and children may spend the majority of their day fetching water from distant, and often unsafe, sources. The majority of the world’s poorest people are smallholder farmers, most of whom rely on low-yield, rain-fed agriculture, and their livelihoods are constantly threatened by inconsistent precipitation and drought.

As can be seen from the first image, most of South Africa is approaching physical water scarcity with the northern regions already classified as physically water scarce.  Bear in mind that these classifications by the UN are dated (2007) and the situation has certainly not improved over the past 5 years.  Businesses and households in South Africa can relieve the effects of physical (and economic) water scarcity by the installation of water storage tanks for collecting rainwater.  Be sure to choose high quality rainwater tanks or water tanks such as those manufactured by JoJo Tanks.  Click on the links below to see the wide range of tank types and sizes available and other JoJo Tanks products.

Beat the JoJo Tanks Price Increases – Order Your Tank Now!
Q&A: Water Crisis Is Serious But There Are Solutions