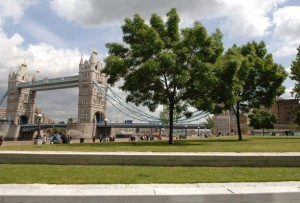 Despite the recent hot spell, Londoners continue to show restraint with their use of water.  What a difference a decade and higher water rates can make.  With a population about 9% greater than in 2001, Londoners are using nearly 20% less water on a daily basis.

“The consumer is doing a great job of conserving water,” Matt Feldberg, manager of water demand for the city of London, said Tuesday.

He notes it was 20 years ago London adopted a water rate structure to encourage water conservation.

And even during the peak day this year, he noted, Londoners used 176 million litres, two million litres less than the average summer daily amount used in 2002.

Meanwhile, city hall is asking Londoners to help drought-stressed trees on private and public property by watering them, a move estimated to cost users less than 25 cents a week for each tree.

The average amount of water pumped into London reservoirs each day stands at 143 million litres. That amount anticipates daily demand with a safety cushion for firefighting purposes and is a good reflection of consumption, Feldberg said.

This year’s consumption (“pumpage”) is an average two million litres less a day than last summer.

“People have become more conscious about their water use.”

The odd-even system for non-essential water use such as for lawns has been in effect since June 1. Enshrined in the city water bylaw, residential properties with odd numbers can water lawns on odd-numbered dates, while those with even-numbered properties are permitted to do so on even-numbered dates.

Large cities face a daunting future when it comes to water supply.  Even traditionally ‘wet’ nations such England have faced serious water shortages in the past decade.  Urban city dwellers often become disconnected from issues such as water- it is so easy to turn on a tap and not think about where the water comes from and how it gets there.  It is thus encouraging that Londoners are embracing water conservation.  Urban and rural dwellers can benefit from installing water tanks on their properties- either for rain water harvesting or for storing municipal water.