Will cities ever develop better water use strategies? 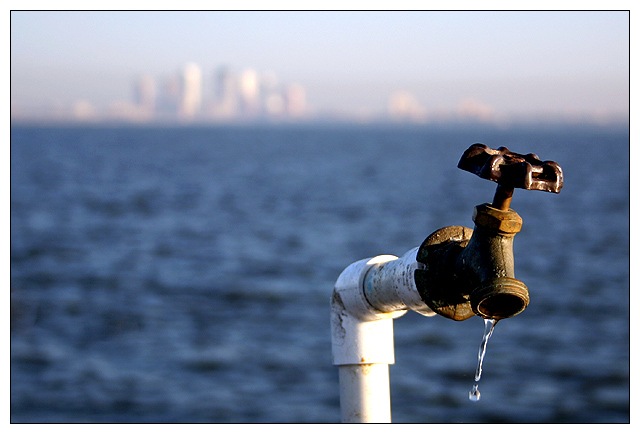 The question and answer dialogue below makes for some interesting and thought-provoking reading.  Although domestic water use pales in comparison to agriculture, industry and energy production, it is still smart to investing water conservation measures such as rain water tanks, in addition to adopting water-saving habits.

If the definition of insanity is making the same mistakes over and over, then many cities have taken a certifiable approach to securing their water supplies — and they need some radical therapy before taking the big economic, ecological, and human hits that come with a permanent state of thirst.

But the time to act is now, argues Brian Richter, a senior freshwater scientist at The Nature Conservancy and the study’s lead author — he says a global urban water crisis is already here. Below, Richter tells us more about what cities need to do to say on the right side of dry.

Q. Many cities take a similar pattern of water development, according to your research – going from exhausting local surface and groundwater supplies to importing water to implementing water conservation to finally recycling water or desalination. Why is this pattern unsustainable?

A. When we overuse a freshwater source, we set ourselves up for disaster. Each of the cities we reviewed in our study has contributed to the drying of a major river or important groundwater spring. That has obvious ecological impacts and social consequences — it affects livelihoods and human health by compromising fish production, concentrating pollution, or curtailing recreational activities.

Because these impacts are so pervasive and damaging, we need to begin investing in water supply approaches that don’t just minimize these adverse impacts but instead begin to reverse them.

Q. Are we looking at a crisis in securing urban water supplies in the near future, either for U.S. cities or globally?

A. That crisis is already upon us. Our study revealed that half of all cities — both in the United States and globally — are located in watersheds where more than 50 percent of the renewable supply of water to our rivers and aquifers is being consumed, at least seasonally. Now, that’s not a problem as long as we’re receiving plentiful precipitation. But if you’re using that much water on an average, ongoing basis and you go into a severe drought, there isn’t enough water to meet all needs.

Q. Phoenix, another one of your case studies, has lowered its per capita water use by 25 percent since 1990 through various water conservation measures — and yet Phoenix is water scarce. Why?

A. Water scarcity results when we heavily deplete a freshwater source. It doesn’t necessarily mean that you’re experiencing regular water shortages in your home or business. But it does mean that you’re at considerable risk if the water supplies continue to be increasingly depleted by other users, or you get into a drought situation.

Phoenix’s water conservation efforts are admirable, but they need to do much more. They are heavily dependent on the Colorado River, which is so thoroughly overused that it dries up before reaching its delta in the Gulf of California. During a severe, prolonged drought, the reliability of that water source will be in jeopardy.

A. Contrary to popular belief, water conservation and recycling may not result in a net improvement in the affected water source. If the water that’s conserved is simply used to supply additional urban growth, then the water source is no better off.

The vast majority (80-90 percent) of water used in cities is returned to the freshwater source after use. So only 10-20 percent of the water is “lost” or “depleted” — most of that goes to outdoor landscaping or golf courses. Water recycling shuts off the return of water to the freshwater source — instead of discharging the used water back to a river, the water is used for domestic, commercial, industrial, or agricultural purposes.

So water recycling will “save” water — and reduce water scarcity in the freshwater source — only if it reduces the fraction of water that was previously being lost from the freshwater system.

Q. What about desalination if you’re a city on the coast? It’s expensive — but Adelaide’s desal plant is supposed to provide more than 25 percent of that city’s water supply by 2013.

A. Desalination could be a wonderful solution to our water challenges — more than one in every two people on Earth lives near a coast. But removing salts from ocean water requires a tremendous amount of energy, and the expense of that energy makes desalination the most costly way by far to supply fresh water to cities.

And there’s a wicked climate change feedback loop for desalination: using it to create fresh water produces carbon emissions that change our climate, which in turn affects the precipitation that supplies fresh water. Without a radical breakthrough in energy production, desalination will continue to supply only a tiny fraction of the world’s freshwater needs. (Note that Adelaide is using 100 percent renewable energy to power its desalination plant.)

Q.  You cite San Antonio as a leader in integrating water conservation into its planning. What’s San Antonio getting right that other cities aren’t?

A. Few cities in the world have pushed urban water conservation as far as San Antonio. Their community outreach program is outstanding. … San Antonio is also investing in agricultural water conservation to reduce overall use of the Edwards Aquifer, the city’s primary water source. That’s the way of the future: Cities leading efforts to help everyone that uses the same water source to do so in the most conservative and sustainable manner possible.

Q. You argue that cities should help upstream farmers implement irrigation conservation that will leave more water for urbanites downstream. It sounds good in theory — but since agriculture accounts for 90 percent of all freshwater depletions, why should cities foot the bill?

A. Because most farmers won’t implement water-saving measures unless it saves them money — or at the very least, until it doesn’t cost them anything. Many farmers are already implementing water conservation measures because they reduce electricity costs. But sometimes the cost savings aren’t sufficient to motivate a farmer to go through the time, trouble, and change in farming practices.

That’s why cities need to step in to help. As we point out in our paper, saving just 5-10 percent of the water being consumed in irrigated agriculture can usually free up enough water to meet a city’s needs. It can also free up water to restore river health.

Q. So how do we do this? Do these partnerships exist already?

A. One great way is to create a water market, such as exists in the Murray-Darling basin in Australia or in the Edwards Aquifer of Texas, where farmers can sell any “saved” water to other farmers, cities, or environmental interests as long as it does not harm other water users or the environment. There are few better things that governments could do to improve water management.

Another urban-rural water partnership that can work is a bilateral agreement between a farmer, or an entire irrigation district, and a city. The deal between San Diego and the Imperial Irrigation District in southern California is a great example. That arrangement will provide 37 percent of San Diego’s water supply by the year 2020, it’s very cost-effective, and it provides a new source of income and security for the farmers. Our analysis suggests that one in every two medium- to large-sized cities could — or should — pursue partnerships of this nature.

Q. What should urbanites do to prepare for the coming urban water crisis — pressure their lawmakers? Take personal water conservation measures? Other steps?

A. In my Water Sustainability course at the University of Virginia, I teach that everyone needs to take responsibility. Figure out how much water you use, and what impacts you might be causing. Almost everything you do requires water — not just the water you use directly in the kitchen, bathroom or laundry room, but also the water required to produce your electricity, food, clothing, gasoline, and other consumer goods. Regardless of your political party, be conservative in water use.

And to the point of our study: Ask your city manager or water supplier why they aren’t working with local farmers to help them save water and restore health to our rivers, lakes, and aquifers.