Converting a Swimming Pool to a Rainwater Tank 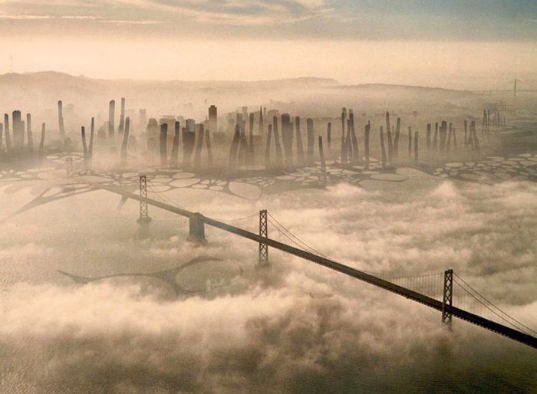 Across the world the need for water is growing rapidly and agriculture is by far the most intensive sector for consumption. 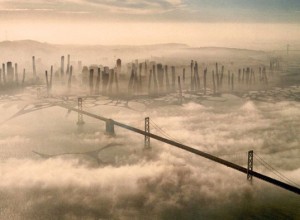 But scientists say fog, one of the most plentiful supplies, could provide a renewable resource for millions, writes Colin Randall, Foreign Correspondent.

Every cloud, or so children are taught in the English-speaking world, has a silver lining.  Some predicaments may present something of a challenge in looking for the optimistic flipsides.  But the next time a dense cloud of fog hovers over Abu Dhabi or Dubai, devouring towers and disrupting travel, consider one highly positive aside: that pea-souper could be a valuable water source.

In Angola, Luanda – one of the fastest growing cities in the world – is desperately short of clean water.  Only one in six Luandan households has running water, forcing most of the inhabitants of the musseques – the vast slums that constitute the majority of Luanda’s land area – to depend on contaminated water brought by lorries from rivers hours north and south of the city.  The price of water in the musseques can be as high as 15 US cents a gallon, a major burden on a populace that lives on an average of US$2 per person per day.  The city regularly tops the world’s most expensive lists and even a hamburger will set you back some Dh178 (US$48.65) at the city’s Epic Sana hotel.  In 2006, the worst African cholera epidemic in a decade devastated the musseques, killing 1,600 people, spread by contaminated drinking water.  Researchers are now looking at fog farming as a way to prevent such tragedies occurring again.  Luanda is by far the largest city in the world in which the weather conditions make fog farming practicable and is projected to jump from a current population of more than five million to nine million by 2025.  Although Luanda experiences something of a rainy season between March and April, for most of the year precipitation is nearly absent — averaging none at all from June to August — as the Benguela and Angola currents of the Atlantic Ocean combine to prevent the humid air from condensing into rain.  This combination of humidity, aridity, and explosive population growth creates a situation uniquely suited to an experiment in urban fog farming, which has the direct potential to meet this need for potable water.

Fog harvesting is usually thought of as a modern concept but the pedigree stretches to ancient times.  But today, when water is increasingly a sought-after commodity, it is not surprising science and invention is being applied to the examples of history in a bid to develop viable, large-scale fog harvesting schemes.  The basic technology, however, is remarkably simple.  Canada’s meteorological service (MSC) began building fog-collectors and installing them on Mount Sutton in Quebec in the 1980s.  The first models consisted of no more than a stretch of canvas, typically 12 metres by 4 metres, stretched between wooden poles with a long trough into which droplets formed by the fog condensing would run.  Subsequent developments have seen the use of single or double layers of mesh, usually made from nylon, polyethylene or polypropylene.  The mesh is manufactured in varying densities to take account of how much water is to be captured from the fog passing through it.

Production rates from such fog harvesting systems range from 200 to 1000 litres of water daily.

FogQuest, a Canadian non-profit organisation, uses modern fog collectors to bring drinking water and water for irrigation and reforestation to rural communities in developing countries around the world.  According to FogQuest’s website, each cubic metre of fog contains 0.05 to 0.5 grams of water.

In the village of Chungungo, Chile, where annual precipitation is less than 6 centimetres, the group says 100 fog collectors have produced 15000 litres of water a day for the past 10 years.  The group says its project in the village of Bellavista in the hills above Lima, Peru, is producing 2271 litres of water a day with seven fog collectors.  The area gets about 1.5 centimetres of rain each year but fog from the Pacific Ocean moves in from June to November.  The project has commercial importance for local growers who use harvested water to help raise tara trees, which produce tannins that are sold for leather treatment.

“Fogs have the potential to provide an alternative source of fresh water in dry regions and can be harvested through the use of simple and low-cost collection systems,” says the online “clean technology” research tool, ClimateTechWiki.org, which offers support to United Nations projects to deal with climate change.  “Captured water can then be used for agricultural irrigation and domestic use” creating the opportunity for farmers to sell crops.  ClimateTechWiki says the technology has several advantages. For example, “atmospheric water is generally clean, does not contain harmful micro-organisms and is immediately suitable for irrigation purposes”.  Installation and maintenance costs of equipment needed to reap water are low and in a recent report, the World Health Organisation gave a clean bill of health to water produced in such a way.  Actual costs of fog harvesting systems vary from location to location.  In a project run by the Chilean national forestry corporation in the region of Antofagasta, the installation cost of a fog collector when the project was started in 2005 was estimated by the US Organisation of American States (OAS) to be US$90 per square metre of mesh. In another project in northern Chile set up six years ago, the cost of a 4 sq metre fog collector was approximately $380, the OAS says and this system produced a yield of 3 litres per square metre of mesh a day.  The OAS says both the capital costs and the operating and maintenance costs are affected by the efficiency of the collection system, the length of the pipeline that carries the water from the collection panels to the storage areas and the size of the storage tank.  One obvious area of possible investment would be in mesh manufacture, with most of the small number of producers currently operating in Chile.

Shreerang Chhatre, a chemical engineer at the Massachusetts Institute of Technology (MIT) in the United States, has explored fog harvesting and admits turning the technology into a profitable business will not be easy.  One example he considers worth pursuing is to apply the technology on his native rural west coast of India, north of Mumbai.  “We welcomed Shreerang as a Legatum fellow because it is an important problem to solve,” says Iqbal Z Quadir, the director of the institute’s Legatum centre for development and entrepreneurship.”  About one-third of the planet’s water that is not saline happens to be in the air.”  He is confident fog farming can be successfully commercialised eventually, and cites a less prosaic example. “The aviation industry in its infancy struggled with balloons, but eventually became a viable global industry.”

Source: The National (By Colin Randall)

Fog water harvesting is one of the many water innovations that the world needs to embrace to avert a global water crisis.  Fog harvesting has been investigated by the Water Research Commission in South Africa (click here for the article) and can be applied on a small scale (filling water tanks or reservoirs that supply a few households) to large scale projects such as the proposed project in Luanda, Angola.  With any type of water harvesting, the water needs to be appropriately stored in reservoirs or water tanks.  High quality water tanks should always be used to ensure longevity and safety of the water.  We recommend water tanks and other products made by JoJo Tanks (South Africa).  JoJo Vertical & Horizontal Tanks are the first and ONLY tanks in South Africa to be tested and approved as “fit-for-purpose” by CSIR’s Agrément SA (Certificate no 2011/385) and have an FDA-approved, food-grade black interior lining.  Click on the links below to find the right jojo water tank, jojo rainwater tank, jojo tank stand or other JoJo Tanks product according to your needs and budget.