A four-year study by the Water Research Commission (WRC) would provide an “invaluable” contribution to the planning and roll-out of water-supply augmentation through fog harvesting, Water and Environmental Affairs Minister Edna Molewa said on Thursday. 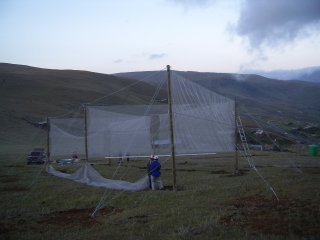 In a written reply to a Parliamentary question posed by Democratic Alliance Member of Parliament Marti Wenger, Molewa said that the study, which started in April 2011, would produce the ‘South African Atlas of Fog Harvesting Potential’, which would effectively map out the areas of the country with the best potential for fog-water capture.

South Africa – with an average of about 500 mm of rainfall a year, compared with the global average of 860 mm a year – is a water-scarce country, which, she said, was further exacerbated by the seasonality and uneven distribution of rainfall across the country. About 21% of South Africa’s land receives less than 200 mm of rain a year.

It was believed that fog-water harvesting in low rainfall areas could enhance water security in water-scarce parts of the country, particularly in rural communities.

To this end, studies undertaken by the WRC, since 1995, have established the feasibility of using fog to supplement existing water supplies and aimed to design, erect and operate a fog water collection system in rural communities.

After the roll-out and three-year monitoring of a number of fully operational pilot fog-harvesting systems around South Africa, including at the Tshanowa Junior Primary School, in the Soutpansberg Mountains, in Limpopo, and at the Lepelfontein village, on the West Coast, it was found that the system would not be universally applicable owing to the spatial and temporal variation in fog characteristics and types.

“The designs are area- and context-specific and there is no comprehensive guide to define the suitable criteria needed for a location to be suitable for this technology,” Molewa said, adding that the more comprehensive four-year study – optimising fog-water harvesting – should further speed up the roll-out of the practise.

All efforts to harvest water sustainably in South Africa should be applauded; fog harvesting may be very area-specific but in those areas where it is suitable, such as Mount Ayliff’s fog harvesting program in the former Transkei. Fog harvesting obviously requires some form of water storage too; plastic water tanks are ideal, being lightweight and easy to transport and install in rugged, mountainous areas. Rainwater harvesting is another great way to obtain free water and is more universally applicable to most parts of South Africa (even low rainfall areas can benefit- a single thunderstorm and a suitably sized rooftop can result in full rain water tanks in a very short time).  Rain barrels or rainwater tanks can take on many forms and sizes, either being aboveground tanks or underground tanks.  In South Africa, JoJo Tanks manufactures high quality plastic water tanks as well as chemical tanks and other polyethylene tanks and products (see links below).