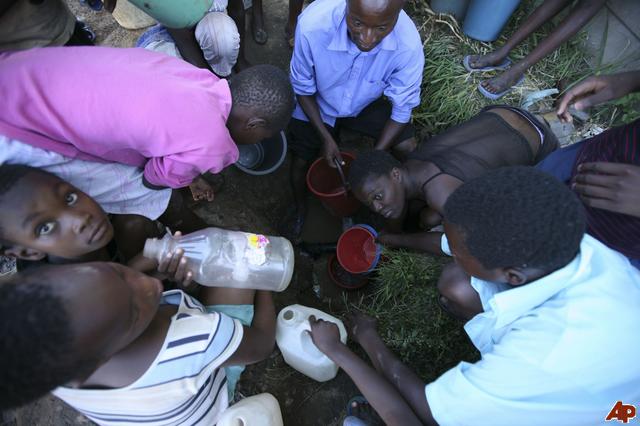 Residents’ associations in Harare have warned that public outrage over ongoing water problems in the city is reaching boiling point, with city authorities being urged to hurry up and deal with the issues.

Intermittent water supply and sewage issues in the capital have been recurring problems for years, and most recently several suburbs across western Harare were left without water for days because of a break down at the Warren Control Pump Station. The areas have included the densely populated Mbare suburb, as well as Glen View, Budiriro, Rugare, Sunningdale and others. Almost a week later, most of the areas are still without clean water.

Harare Mayor Muchadeyi Masunda has promised that there will be an improved water supply soon, after meeting with South African municipal water authorities for advice.

“If everything goes according to plan, we should start seeing considerable improvement in the provision of potable water from March onwards,” Masunda told the Standard newspaper.

Masunda said the city council expected to spend about US$2 million on its plan to reduce the ‘pressure’ on the water system, which he said was currently too high.
“Our pipes are too old, some of them dating back to the mid-1970s, so you can imagine what this pressure, which is high enough to kill a person, does to them,” Masunda said.

“There is a time when people are going to rise up and say ‘enough is enough’ and that time is coming and it is coming fast,” CHRA chairman Simbarashe Moyo warned.

He said the city authorities have failed again and again to provide clean water, and are always relying on the intervention of NGOs like UNICEF, which has in the past sunk boreholes for communities.

“We cannot keep turning to the donor community. We are done with that. The challenge must be solved by the municipality,” Moyo said.

One has to wonder how much longer the citizens of Zimbabwe will be able to stand for the lack of good water management in cities such as Harare and Bulawayo.  Total lack of water infrastructure maintenance and upgrades by incompetent, corrupt government officials has led to this situation.  Whereas Bulawayo is situated in what could be termed a semi-arid part of the country, Harare receives relatively high rainfall and the potential for drawing water from existing dams is there.  This is an example where the major cause of a water crisis can be linked to mismanagement and politics.  Residents in towns and cities in Zimbabwe and in any other country would be wise to invest in rainwater tanks, even if only to supplement existing water supply (and, of course to save money on water bills).  Click on the links below to view the wide range of water tanks, rain water tanks, tank stands, septic tanks and other high quality products made by JoJo Tanks in South Africa.