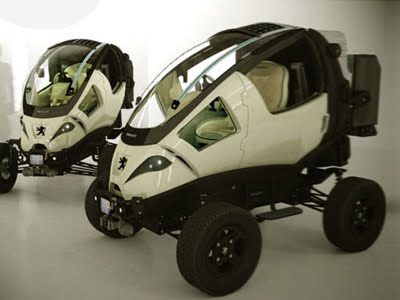 Despite advancements in Information Technology which has the bought the whole world within a computer screen, a lot of human activities are still based on traveling by road, primarily using vehicles. In industrial nations, it comes as a major setback on the ecological environment, which gets polluted as result of the vehicular usage. Hence, with the high demand for low emission vehicle has been on the rise. This list gives a list of 10 cool all-terrain vehicles with zero emission.

Designed by Gu-Han the Helios is powered by solar energy and can even act as an energy station.

A first glance at the Helios ATV and it tells you that it’s a concept vehicle, or some shot out of sci-fi movie. Created by Kim Gu-Han in Germany, this vehicle is a multiple solar paneled car; those batteries get charged through large solar panels placed on its sides. When there is a need to drive the car, all one needs to do is to fold those wing-like panels and go for a spin. However, the limitation in the concept was the low capacity of passengers and also that the input costs of the car were high.

RC4 ATV Electric Concept Car: The KTM RC4 concept vehicle was created by designer Tristan Hipps, who has been known for his eco-friendly concept in automobiles. With a vague resemblance in looks to the Oldsmobile vehicle, the car comes with a capacity to seat 1 passenger which is the driver of the vehicle. An otherwise modernized car, the battery in the vehicle is a Lithium-Ion cell through which power is generated. Since there is no other fuel involved in powering the car, the carbon emissions are nil. The compact design ensured a smooth ride around corners.

The Trakrok is an all-terrain vehicle designed Alexei Mikhailov, falling under the specialized under the Trike Concept of vehicles. It has 2 powered wheels in the front portion and the back has a single wheel, all propelled with electrical motors. The tires have special rubber pads, which help the vehicle gain greater grip on the surfaces which have mud or snow. The fuel tank is placed around the center of the vehicle which changes the center for gravity, and uses a Hydrogen based fuel, which has zero-carbon emissions, and high power generation capabilities, owing to the extremely combustible nature of Hydrogen. The tank is covered by the hard anodized aluminum chassis which durable and can also protect the fuel tank under harsh weather conditions.

Industrial designer Vil Tsimenzin is a known name in the alternative power vehicles segment, and his designs stand out visibly, from the competition. The CD2 Grasshopper was no different with its visible thick tires and its high seat from the ground. Based on dual sources of power, this vehicle can take its driver for an uninterrupted ride, by generating power through its rechargeable battery and also through solar power, generated through the pipes situated on the roof. The top speed of the vehicle is around 45 mph and potential to run for 1.25 hours continuously after a single charge. Also, to indicate its level of power, the color of the vehicle changes, indicating the level of power left in the batteries.

Electric Quad is totally pollution free and has been fitted with recyclable components which will make sure that no harmful substances add to the already poisoned surroundings.

The Electric Quad was created as a model vehicle by designer Facundo Elias, as all its components including the chassis has been made with recyclable plastic. The engine is fitted with a 48 Volt motor and the capability to generate 750 amp of power is completely pollution free as well. It runs on electricity, which gives the car 3 hours of continuous running power. For this, the battery needs to be charged for a minimum of 6 to 8 hours from any 110 Volt charging source. However, if the driver runs out of power in the middle of a journey, there is an emergency charging system, which operates through solar panels placed below the seat of the driver. The digital display gives out all information regarding the power situation of the vehicle so that the driver can plan his/her accordingly.

HumVeeEvo is an advanced version of Hummer, the futuristic ATV includes waterproof chassis to put it in the class of an amphibious vehicle, enabling it to cross deep rivers or other water bodies with ease.

As the name suggests, the HumVee Evo is an eco-friendly all terrain vehicle was designed on the sidelines of Hummers, with all its imposing physical presence. Conceived by Italian designer Matteo Carneato, this vehicle is capable of travel under all kinds of weather conditions and surfaces including rivers and water bodies. Since the suspension is placed at the wheels itself, it gives tremendous flexibility to the car on rough surfaces, where one might need to take sharp turns. The entrance of the car is from the top, where the seats slide into position once the car is occupied. The engine of the vehicle generates power from eco-friendly fuel cells that use zero-emission fuel.

The ELPH was conceived by Indonesian designer Rizki Tarisa for the year 2050, as an all-terrain vehicle which also gives its driver supreme comfort and ease of use. Coming in an aero-dynamic shape, this vehicle is powered by hydrogen fuel cells, which have emissions only in the form of water vapor making it completely pollution free. Headlamps, fog lamps and LED corner lights are a part of the design as well, making travel on busy roads very easy. The suspensions have been placed within the tires which reduces noise and vibration of the vehicle. The additional boot-space at the back allows you to go for the shopping trips, and the easy entry into the car is enabled by 2 doors at the sides, which operate with signal of fingerprints.

Peugeot Capsule Electric ATV:  The Peugeot Capsule can do what all ATVs do, but in a more ecofriendly manner and designed for all weather conditions and it also has enough storage space to allow for extended overnight adventures.

Designed for going on camping trips, the Peugeot Capsule was designed by South African designer Alp Germaner, but it still hasn’t gone into the production lines. The capability to travel under most weather conditions, this ATV gets its power from the Lithium Ion batteries, and just in case power runs out, the solar panels can used to charge the batteries all over again. There is a built-in storage compartment which can be taken out and used as a table at campsites or to even store luggage when needed. A touch-screen has all the controls of the vehicle within a single touch of the driver, who can also use the satellite based communication systems to interact with outside world.

Coming from Argentinean designer Angela Martin, the Urban ATV Futuristic Vehicles are ecological commuting device is a perfect choice in heavy traffic areas, because of its compact design and easy maneuverability. Meant mainly for city roads, this vehicle can work with equal efficiency in rural areas. The power of the car comes from the electric motor, making it pollution free, and has the seating capacity for 2 people.

KTM AX:  In KTM AX four independent hybrid propulsion motors located in each wheel, the ability to hurdle rocks and other obstacles is superb, and the lack of weight in the chassis allows for even greater movement.

At first look, this ATV looks like something which one might like to see on space missions instead of the city roads, but quite the ride on earth itself! Even though the lower end of the car looks to touch the road, but surprisingly has a high ground clearance enabling it to move on rough surfaces with great ease. The hybrid propulsion motors located at the wheels give it the power to throw out any obstacle in paths such as stones or gravel, and the ease of movement is due to the aero-dynamic design the chassis.