How Green is Bamboo Floor Manufacturing?

Offering respite from the urban jungle along with a host of unseen building benefits, green rooftops are now a rapidly growing trend. 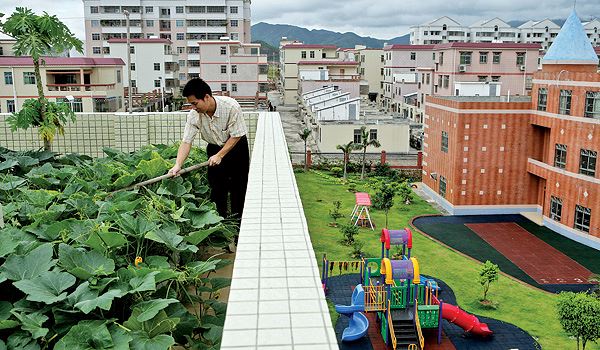 Half of humanity now live in cities.  In the developing world some 3 million people move into cities every week.  This new urban age is faced with many overlapping challenges.  The demand for houses and development has created spatial constraints and a loss of natural greenery in urban landscapes, with knock-on effects on our ecosystems and biodiversity ratings.  But then cities are home to innovation and creativity.  And they are also where the solutions for a more sustainable world will necessarily be put to the test.  One of the innovations that you can be sure to see more of is the greening of urban rooftops.

Having progressed from being more than purely an aesthetic trend, green-roof technologies are now systems that offset climatic problems of cities such as heat-island effects and pollution, while offering positive benefits from improved water retention and quality to enhanced biodiversity and urban agriculture.  Investing in green roofs, as a type of green infrastructure, not only helps to mitigate climate change but makes economic sense too.

The cool effects of green

To meet the growing demand for space in cities, we’ve created concrete jungles at the expense of natural open spaces like parks and gardens.  Modification of urban land surfaces, and the fact that buildings also retain heat, have created urban heat islands that trap high temperatures in cities and their buildings.  Development over fauna and flora also means that we can’t benefit from the natural air-conditioning function of trees and plants.  Plants absorb heat during the day and in doing so, they transpire water and reduce the surrounding air temperatures, otherwise known as evapotranspiration.

Through shading, absorbing and reflecting sunlight and evapotranspiration, green roofs reduce the temperatures of buildings.  At a broader scale, green roofs not only cool individual buildings, but with enough of them, the overall temperature of a city can be reduced, counteracting the heat island effect.  A Canadian study predicted that if 8% of Toronto’s buildings has green roofs, the city’s ambient temperatures could be reduced by 2°C.  By absorbing heat during the day, green roofs retain daytime heat so that buildings are also kept warm at night.

Aside from mitigating climate change, there are also economic benefits to the cooling effects of green roofs.  By reducing building temperatures, green roofs reduce the need for air conditioners and heaters that have become a given in city living.  The temperature reductions of the Canadian study translated into city-wide savings of R90 million – money which is freed up to use for addressing other pressing problems such as poverty reduction.

An aerial view of many cities today shows blankets of smog covering urban centres.  Green roofs provide a great opportunity to combat urban air pollution due to the natural purification ability of plants.  By filtering the air that moves across it, a green roof removes pollutants and airborne particles that cause health problems such as asthma.  Green roofs also filter carbon dioxide through the process of photosynthesis: by converting carbon dioxide, water and sunlight/solar energy into oxygen and glucose, green roofs supply us with oxygen and remove excess carbon dioxide.

The benefits of green roofs, such as air quality improvement, are felt by all city dwellers, both human and non-human.  If designed appropriately, green roofs can preserve the natural habitats and biodiversity that are under threat in increasingly built-up areas.  By specifically designing to mimic endangered ecosystems or habitats, they can themselves become valuable ecosystems that support diverse species, such as butterflies, insects and rare plants.

From water filtration, runoff reduction, to water retention, green roofs naturally provide solutions to the rising water troubles in cities today.  In terms of water retention, green roofs store water in the substrate layer of roots and soil underneath the roof garden itself.  This water is eventually taken in by the plants, which return the water to the atmosphere through evapotranspiration.  Not only do green roofs retain precipitation, but act as natural filters for any of the water that does run off.  However, one of the greatest benefits of green roofs is their natural ability to reduce storm water runoff as well as pollution in excess storm water.  By delaying the time at which runoff occurs, stress on drainage and sewage systems is minimized, which is critical during peak flow or flash flood periods.  In many cities today urban flooding is becoming a major concern as rapid development is increasing the amount of hard surfaces at the expense of green spaces and natural drainage systems.

Rapid urbanisation has resulted in development over natural open spaces and arable land that were previously used for agricultural purposes.  As a result, many urban centres, which were traditionally net exporters of food, have become net food importers.  The loss of arable land to grow our own fruit and vegetables, and the fuel, energy and water involved in transporting food from long distances, is one of the reasons why cities’ carbon footprints have reached unprecedented levels.  More importantly, importing food impacts on cities’ ability to secure food in the future with disproportionate effects for vulnerable groups like poorer communities who can’t afford the high prices associated with imported food.  Roof gardens are innovative opportunities to grow food crops and promot urban gardens to improve food security.

Growing your own vegetables, on your own roof, is a way to reduce your reliance on supermarket chains that import some ‘fresh’ produce from far away.  In the process, you get back in touch with nature and can help other communities improve their access to food that is fresh, green and urban.

Also read Living on a farm in the city and Edible rooftop gardens.