Ever wonder why air pollution is worse on hot summer days? 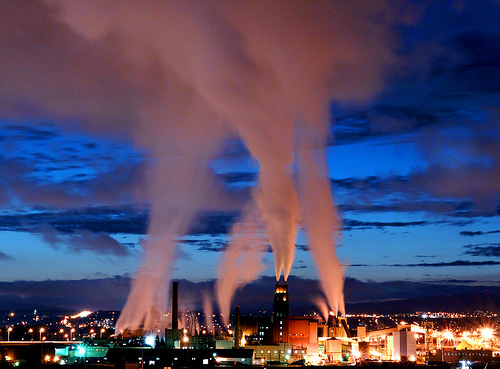 Extreme heat across much of the U.S. this week is triggering potentially unhealthy levels of air pollution, at least for those especially sensitive to dirty air, according to the Environmental Protection Agency. When air pollution levels rise, people are wise to stay indoors, or at least avoid heavy exertion outdoors when ozone levels are highest (typically in the afternoon and evening on hot summer days). That message should be particularly heeded by the elderly, babies and young children, and those with asthma, emphysema or other lung and heart conditions.

But what exactly is air pollution? And why is it worse on hot summer days? The Daily Green wants to clear the air (I know, I know) by explaining a few common air pollution facts, myths and conundrums:

Ozone Is Good. No, Wait. It’s Bad
Fact: Ozone is the most important air pollutant in the U.S. It is the major component of smog, and health experts are continually identifying ways it acts alone to destroy lung tissue, cause asthma attacks and otherwise harm the health and well-being of people. Ozone is also the compound that, in the 1980s, the world rallied to save from depletion: “Save the Ozone Layer!” we all cried, until we finally passed the Montreal Protocol to phase out the use of chemicals that depletes ozone in the atmosphere. (Below, see an image of the ozone hole over Antarctica, which still forms each winter despite our efforts so far.)

So what gives? How can it be good and bad both? For ozone, it’s all about location: Ozone at ground level is harmful to humans and basically useless for the atmosphere; ozone at altitudes over about six miles doesn’t harm our lungs, and deflects harmful radiation from the sun, protecting our skin.

So Ozone Is Natural Then. You Just Said It Yourself
Myth: Yes, ozone is as natural as oxygen or any other compound (oxygen is made up of two oxygen atoms, and ozone three). But just because ozone is a normal component of the upper atmosphere doesn’t mean it’s natural, normal or desirable wherever it is found. Ozone forms at the ground level when volatile organic compounds and nitrous oxides mingle in the air. Those precursors come from the smokestacks on factories and power plants, primarily, and from the tailpipes of our vehicles, so ozone at ground level is very much an unnatural result of man-made pollution.

Ozone Is a Problem in the Summer
Fact: Ozone needs heat and sunlight to form from its precursor chemicals. That’s why you hear warnings about air pollution most often on hot sunny summer days. But be aware: Ozone persists for hours after forming, so unhealthy conditions often last well into the evening, after the sun has gone down. Also be aware that ozone isn’t the only pollutant out there. Another major cause for concern are fine particulates — dust and soot, but also tiny chemical droplets. Particulates can cause air pollution problems year round, especially since furnaces and wood-burning stoves can produce unhealthy levels in the winter.

Ozone is Only Dangerous Outdoors
Myth: Unfortunately, many companies are marketing “air purifiers” that pump out ozone at levels far worse than you’re likely to encounter even on the hottest summer days. Don’t be fooled by marketing: These air purifiers are dangerous, according to the American Lung Association and, among others, the California Air Resources Board, which published this list of harmful ozone air purifiers so consumers can avoid damaging their lungs while trying to clean the air, and check out these 25 ways to really purify indoor air.

Ozone Pollution Is Getting Worse
Myth: While scientists continue to document health problems that occur at ever lower levels of exposure, the amount of ozone in the air is generally decreasing, thanks to the enforcement of the Clean Air Act. Levels of pollution from smokestacks, particularly, has been decreasing (at least when it comes to the precursors of ozone; the same can’t be said for toxic mercury or carbon dioxide). The air should be getting ever cleaner. The EPA on July 6 proposed new rules that would cut sulfur dioxide pollution by 71% and nitrogen oxides pollution by 52% by curbing smokestack pollution from power plants in the eastern half of the country. There are two big caveats, however: Scientists are continually documenting lung damage from ozone exposure at lower concentrations, and advocates say the EPA’s standards are too weak; and global warming, which is ushering in more and hotter hot summer days, is expected to make air pollution worse.

While certain negative components of air pollution in the US may be decreasing, this is not the case in many emerging economies such as India and China (where the Chinese government has admitted that they have a serious pollution problem).  Read 4 Steps to make your indoor air safer and Air purifying plants.