How much water does it take to make 1 litre of beer?

Despite Shell’s assurances, fracking does pollute water, and the fact that it has been stopped in several countries because of pollution concerns should be enough reason not to try it here in South Africa. 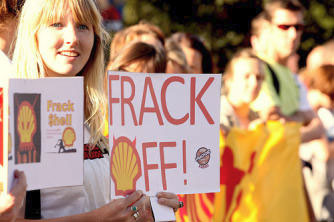 What’s more, Shell doesn’t exactly have an ecological record in Africa as pure as diven snow.  Nine million barrels of spilt oil in the Niger Delta is more than BP managed to disgorge in to the Gulf of Mexico.  And then there was the nasty business around the execution of Nigeria’s leading environmental campaigner

, Ken Saro-Wira.  So Shell, you really must excuse the good people of the Karoo when they’re suspicious of your motives.

Fact of the matter is, mining by its very nature is an exploitative, polluting, finite and irreparable activity.  But we also need energy.  The economy has to run on something.  That’s undeniable, but it’s how we are going about this that is deeply worrying.

Administratively, the issuing of prospecting rights, mining licenses and the environmental oversight of mining activities is shocking, to put it mildly.  For starters, the mineral affairs department, like most other South African state departments, obviously isn’t as functional as it should be.  Then there’s the fact that mining has become the vehicle for every politically connected wannabe billionaire to make a quick buck.  And if it comes at the expense of the Karoo, well, then so be it.  In the toxic cauldron of state dysfunctionality and boundless greed, a lot of very,very bad things happen.  And so landowners, for instance, after a few cynical amendments of the Mining Act, have effectively been reduced to mere spectators to the destruction of their properties by mining companies.  That surely can’t be right?

And there’s a second serious problem.  You and I.  We all aspire to live like Americans.  It’s apparently called “getting ahead”.  Unfortunately it also requires massive amounts of energy that one either has to go to war over periodically, or that will eventually result in your country becoming one huge mine dump.  Very few are prepared to shave off any energy-sapping luxury from their lives.  It always has to be the other guy.  And it’s not as if we’re containing our numbers, or expectations.  Already, about half of all electricity users in this country aren’t paying for it.

As for the chaps generating electricity, Eskom, their solution to the problem doesn’t stretch further than excessive hikes in the electricity price.  Sure, they pay lip service to renewable energy sources, but in fact, burning coal seems to suit them just fine.  Why else have they just reduced the price they’re prepared to pay for renewable energy produced by private operators?

At the end of the day it’s quite simple.  Non-renewable energy is just that.  It will run out, and we need to do things differently.  It’s not that hard to understand.

Contact us for a free quote on a solar geyser, water system, rainwater tank or water tank.