How to install a water-saving showerhead

How to Plan and Plant an Organic Community Vegetable Garden

‘Third-generation’ photovoltaics promise to bring solar power everywhere, from solar roofs to see-through solar windows. Is the age of ubiquitous solar finally upon us?

I stumbled on a news item at CleanTechnica today about next-generation solar windows that reminded me to check up on the progress of one of my personal favorite gamechanging solar technologies.

First, the CleanTechnica item in brief: A company called New Energy Technologies has received some government funding to move forward with the development of a photovoltaic (PV) coating for windows. This is one of a host of “organic PV” and other nanoparticle technologies pursuing the promise of truly ubiquitous solar power. (There’s a round-up of a few others, from spray-on solar paint to solar “ink,” in the linked article.)

Now to my personal fave: Dyesol. 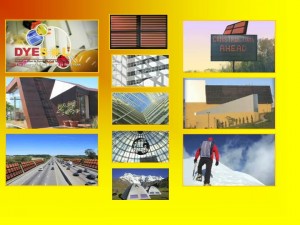 I first encountered the company on a research trip to Australia back in 2008 (which eventually led to this Fast Company feature, among other things). At the time, Dyesol was a small R&D shop working out of an industrial park in suburban Canberra. I gawked in amazement at the extraordinarily fast and simple production process for their solar cells, which is closer to silk-screening a t-shirt than the advanced silicon-chip processing used in conventional PV. And then my jaw dropped even further as I watched a small Dyesol panel in action — spinning a pair of fans in the company boardroom. Indoors. With the blinds closed. In deep shadow. (There’s a reasonably layperson-friendly description of the tech wizardry involved at Dyesol’s own website.)

Dyesol had just entered into an agreement with the company formerly known as British Steel; it was known for a time as Corus and is now a division of India-based Tata Steel. The British arm of the company makes millions of square feet of Colorcoat cladding each year — steel roofing coated in a variety of weather-resistent colors, enough of the stuff produced annually to reroof every Walmart in America.

The idea was to coat the roofing material in a layer of Dyesol solar cells instead of a decorator color. The technical specs seemed promising, and the Welsh government kicked in enough cash to turn the idea into an R&D project worth about $20 million thus far. The latest? It appears to be all systems go. The test production facility is up and running, and a demonstration building roofed in solar cells is in the works.

The promise here is truly awe-inspiring. The big knock on solar to date has been its high production cost and somewhat time-consuming implementation process. The great promise of these “third-generation” solar technologies like Dyesol (the first two generations being conventional silicon PV and thin film) is that they can be applied together as BIPV — building-integrated photovoltaics, solar electricity generators that could simply become part of the skin of buildings, built into walls and windows and roofs just like reflective coatings and low-E deposition layers are today. Indeed my most recent encounter with a Dyesol cell was in Toledo, Ohio, where architectural glass maker Pilkington has started playing around with the idea.

The age of ubiquitous solar power remains a few years off at present, but it’s never been closer at hand and the road to that ubiquity has never looked quite so straight and smooth.

Solar panels have certainly come a long way since they were first invented; the term ‘solar panel’ may become obsolete for the new solar technology that continues to evolve a rapid pace.