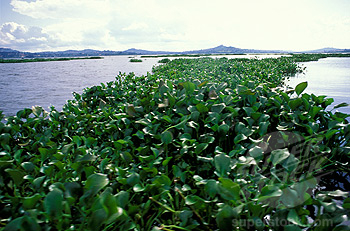 The rapid growth of invasive water hyacinths has taken a serious toll on Kenya’s Lake Victoria, creating inhospitable conditions for the fish local people depend on, while sheltering other unwelcome guests: disease-carrying snails and deadly snakes. But with a little help from a U.S.-based organization, villagers living near the lake are turning this environmental crisis into an economic opportunity.

Working with the group Village Volunteers, rural communities in Kenya are 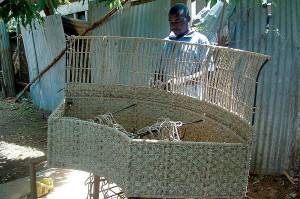 harvesting water hyacinth from the lake and capitalizing on its tough but flexible nature to weave together baskets, chairs, and other pieces of furniture — even biodegradable sanitary napkins — to sell for extra income. The plant is also used to make fuel briquettes for cook fires and effective fertilizers, Village Volunteers director Shana Greene told the WorldWatch blog “Nourishing the Planet.”

Freshwater Lake Smothered By Water Hyacinths
The largest freshwater body in Africa, Lake Victoria is a key source for bathing, drinking, and cooking water, as well as fish to eat and sell. Already diminished by overuse from dams, its smothering by the hyacinths, which originated in the Amazon but have rapidly spread throughout the world’s tropical and subtropical regions, threatened to be little short of devastating:

The hyacinth form lush green carpets that warm the water’s temperature while simultaneously reducing sunlight, depleting oxygen levels, and blocking access to the shallows, tangling fishing nets and trapping boats. The plants also make an ideal hiding ground for disease carrying snails and poisonous snakes. “Fish are an important source of protein for local communities,” says Shana, “and the warmer water harbors all sorts of diseases, making it less safe for drinking.”

The program with Village Volunteers has thus far only been able to clean the invasive plants away from the parts of the lake nearest the shore, but it is already making a difference in improving water quality and fish habitat.

“We are helping farmers to not only improve their incomes and livelihoods, but also to make at least a small difference on their local surroundings,” says Shana. “They are turning a devastating situation into a life-improving situation.”

The Water Hyacinth problem in South Africa is being tackled via a combination of biological control agents and chemical herbicides. The Rhodes Zoology and Entomology Department has recently been awarded a R9 million contract by the Working For Water (WFW) Programme of the Department of Water and Environment to continue its vital research into biological methods of controlling some of South Africa’s worst invasive waterweeds, water hyacinth being one of the worst.  Water Hyacinth presence is also often an indication of water pollution in the form of agricultural fertilizer runoff and sewage; this is another front where the problem can be tackled.  In contrast, whereas South Africa is spending millions of Rands on the problem, Kenyan and other East African countries are actually making money from this pest.  There have also been proposals for water hyacinth to be processed and made into biofuel.