Innovations That Could Change The Way We Use Water

Opened in October 2012, the first phase two mile stretch is part of the Blue Island/Cermak Sustainable Streetscape project in Pilsen, which was introduced in 2009 with the aim of reducing overall energy usage by 42 percent.

The $US14 million initial project’s full range of data and sustainable elements will not be available until the street canopy fills in and cooling technologies are activated in the summer. The project will eventually extend along Cermak and Blue Island all the way to Western in Chicago and is not only green, but is also cheap: the current 14 blocks cost 21 percent less to build than similar projects Chicago City officials considered, and should be cheaper to maintain.

The location runs through an industrial zone which links the state and US highways, and whilst not eligible for LEED certification because it is not a building, the project will record quantifiable results through a set of equally aggressive sustainability goals charting eight performance areas such as storm water management, material reuse, energy reduction, and place making.

The most anticipated data will be collected from the first commercial use of photocatalytic cement for the inside highway lanes. This “smog eating” cement contains nano particles of titanium dioxide and is designed to clean the surface of the road and remove nitrogen oxide (NOx) from the surrounding air through a catalytic reaction driven by UV light. In addition CDOT used 30 percent recycled content in the sidewalk concrete and installed roadways that include reclaimed asphalt pavement, slag, ground tire rubber and reclaimed asphalt shingles.

The project’s water management process for phase one sees the use of potable water for any landscape irrigation eliminated and diverts up to 80 percent of annual rainfall from the combined sewer through a combination of the bioswales, rain gardens, permeable pavements, and stormwater features. This includes a pilot of 95 drought tolerant, native plant species in bioswales and infiltration planters to evaluate their effectiveness in roadside conditions. 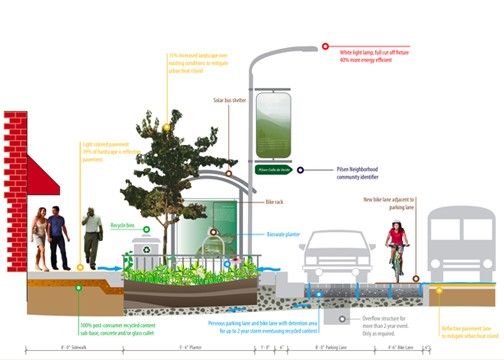 Along with the photocatalytic cement, the project uses solar reflective or high albedo pavements. This combined with the 131 percent increase in landscape and canopy cover along the two-mile stretch is part of CDOT’s drive to reduce the urban heat island (UHI) effect. UHI is considered a contributor to elevated temperatures in urban areas, the Lawrence Berkeley National Laboratory estimates that the heat island effect can elevate temperatures as much as 8 percent above those of adjacent suburban and rural areas. Each degree temperature increase can exacerbate smog formation which makes the increased landscape shading a good natural solution, in addition tree canopy cover can also vastly reduce the cost of stormwater storage.

Phase one of the Blue Island/Cermak Sustainable Streetscape project should become the talking point for green urban infrastructure if the emerging data proves as positive as predicted. Should the data also demonstrate a positive return on investment it could become the blueprint to make even the most relentless developer take note. If an industrial zone of a major city like Chicago can use streets and walkways to turn around water runoff and reduce energy consumption, then the future is bright for urban centers everywhere.

With increasing urbanisation, this type of initiative needs to be embraced by all cities of the world for some degree of sustainable development for the burgeoning human population.  Cities in developing countries tend to be poorly planned where pollution and environmental degradation is rife; inexpensive and practical innovations for these cities should be a priority too.