Time to ruggedize: We should talk more about preparing for climate change

Back when I started covering my beat, it was conventional wisdom among greenies that it’s best not to talk too much about adapting to climate change. The worry was that it might lure people into a false sense of security, get them thinking there’s no need to cut emissions since they can adapt to whatever changes come. 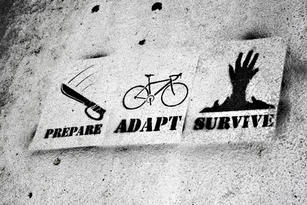 I’ve come to think that this is a deeply counterproductive way of looking at things. In fact, adaptation may be the most effective way to approach climate change.

What got me thinking about this most recently was a presentation I saw from Cara Pike of the Social Capital Project called “Communicating About Climate Preparation & Adaptation.” You should check it out, along with SCP’s longer report, “Climate Communications and Behavior Change: A Guide for Practitioners.” A lot of what follows is purloined from those sources.

The first thing to note is that “adaptation” is a woefully bloodless term. Insofar as it means anything at all to people, it implies something gradual, painless, and passive. Pike suggests adding “preparation,” which is a bit more plain-English and proactive. “Adaptation and preparation” is a bit of a mouthful, though.

My favorite term at the moment is one used frequently by my friend Alex Steffen: “ruggedizing.” It has a fairly well established definition in tech circles, but even if you’re not familiar with it, its meaning is immediately evident. And it captures the sense of toughening-up that needs to be conveyed.

Here are a few reasons I think it would be good to talk more about ruggedizing:

As every communication consultant on the planet will tell you, the central challenge in talking about climate change is that it seems far away. The American people generally think that climate change is going to hurt plants and animals, or other people in poor, distant countries. It just doesn’t strike most people as a problem relevant to their own lives and homes.

The obvious answer to that is to talk much more specifically about local impacts, but that turns out to be incredibly difficult to do in a scientifically credible way. Climate science just hasn’t advanced enough to pinpoint local effects with much precision.

You don’t need to know exactly which impacts are attributable to climate change to start talking about ruggedizing, though. You just need a general sense of what your region will face in coming decades. Many of those challenges exist whether or not climate change does; climate change merely accelerates or exacerbates them.

How can we make this city, this region more resilient? What will we do if our roads get washed out in a flood? What will we do if we face a water shortage for a few months, or a year? What will we do if a beetle infestation destroys our forests or drought raises the price of food? These questions are inherently place-based and relevant. They call out for community action.

Like I said, many of the problems facing U.S. cities exist entirely apart from climate change: brittle and crumbling infrastructure, inadequate public services, poor or no disaster prep, the rising cost of fuel and congestion, declining freshwater supplies. Climate change is expected to make all these problems worse in one way or another, but they’re not waiting on climate change — they’re here, now, and only getting worse. They are obviously urgent in a way that “global atmospheric temperatures will be too high in 2080” isn’t.

For reasons having very little to do with science, climate change has become an ideologically freighted “debate” in American politics. It automatically sorts people into camps. Focusing on ruggedizing can skip a lot of that.

Whereas personal contributions to carbon mitigation often seem to range from hopelessly inadequate (switching light bulbs) to utterly futile (calling senators), the kinds of projects that make a place more resilient almost by definition take place at the community level. They involve both individual initiative and group coordination. Their results are tangible and salient. They build the kind of social connections that are themselves a form of future-proofing.

Mitigation and adaptation are often presented as opposing strategies, but the fact is, many of the things cities need to do to prepare for the rigors of climate change will have the happy side effect of reducing their carbon pollution.

For instance, the residents of Brisbane are discovering that when disaster strikes, it’s not very handy to have everyone spread out all over the place and utterly dependent on cars to get anywhere. It’s more resilient to have people closer together, more able to walk or take shared transportation. It just so happens that also reduces vehicle emissions.

I would also argue that cities and regions that generate their own electrical power are more resilient — they don’t depend on the extended infrastructure of mines, railroads, large power plants, and transmission lines to keep their lights on. Distributed generation consists of many small nodes, spread out in space, which is inherently more robust than a single source whose failure could bring down the entire system. I suspect this will be vividly demonstrated many times over the next decade.

Do you think climate hawks should expand their focus on adaptation/preparation/ruggedizing?