Mass Animal Deaths Around the World 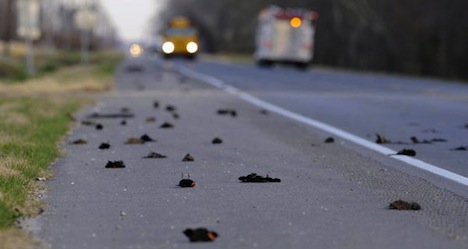 As you’re likely aware, there’s been a pretty bizarre spate of mass animal deaths reported around the world. First, it was the thousands of birds that fell from the sky in Arkansas on New Year’s Eve. Some 100,000 fish also washed up on the shores of a river 100 miles away. Birds fell from the sky in Louisiana and Kentucky, too. Two million fish washed up dead in Chesapeake Bay. 50 birds fell from the sky in Sweden. 100 tons of fish washed ashore in Brazil. 40,000 crabs were found dead in England. All of this carnage has left people around the world wondering the same thing: What the hell is going on?

Unfortunately, there’s no good answer. The explanations offered up so far run the gamut — from being dismissed as a series of unrelated, unfortunate coincidences to the suggestion that the deaths are a result of unusually cold weather to full-bore conspiracy theories that claim the US government is behind it all — but nothing conclusive has been determined. Here’s a closer look at the various incidents:

Thousands of Dead Birds Falling from the Sky
The AP reports that “Environmental service workers finished picking up the carcasses on Sunday of about 2,000 red-winged blackbirds that fell dead from the sky in a central Arkansas town.” The blame? Still open to speculation (though the loud-noise theory has gained traction):

Arkansas Game and Fish Commission ornithologist Karen Rowe said Saturday the birds showed physical trauma, and speculated that “the flock could have been hit by lightning or high-altitude hail.” The commission said that New Year’s Eve revelers shooting off fireworks could have startled the birds from their roost and caused them to die from stress.

Then, around 300 more dead birds fell from the sky in Louisiana, and still more were reported found dead in Kentucky. 50 more were found fallen from the sky in Sweden. And around 100 blackbirds dropped out of the sky in New Zealand as well.

2,000,000 Dead Fish Wash Up in Chesapeake
Here’s the Baltimore Sun: “An estimated 2 million fish have been reported dead from the Bay Bridge south to Tangier Sound, according to the Maryland Department of the Environment, which investigates fish kills. The dead fish are primarily adult spot, with some juvenile croakers … Large winter kills of spot have been documented at least twice before, the MDE spokeswoman said, with about 15 million dying in early 1976 and a smaller number in 1980.”

40,000 Crabs Wash Ashore in Kent
The Daily Mirror reports that “More than 40,000 Devil crabs – also known as Velvet swimming crabs – were found strewn along beaches in Thanet along with dead starfish, lobsters, sponges and anemones.” Scientists have blamed the death on colder than usual waters, which may have induced hypothermia in the sea life.

100 Tons of Fish Dead in Brazil
According to the Brazilian news outlet ParanaOnline, “A survey conducted by the Federation of Fishermen’s Colony of Paraná, Paranaguá on the coast of the state, indicates that at least 100 tons of fish (sardine, croaker and catfish) have turned up dead since last Thursday off the coast of Parana.” The fish have washed ashore, and no cause has been determined yet.

All in all, these incidents have led to a search for a unified theory that explains the phenomena — what could be killing all of these animals? The conspiracy theorists that point to the High Frequency Active Auroral Research Program, or HAARP (a government research project that investigates the ionosphere that’s been blamed for many a mysterious event) as the culprit certainly don’t have me convinced. But the patchwork, “great big coincidence” theory leaves something wanting as well.

Though the phenomenon may indeed be partly the result of self-fulfilling prophecy; the Washington Post points out that “when one news report about dead birds becomes big news, a few dead birds anywhere in the world becomes big news.” After all, sudden mass animal deaths do occur more often than most of us realize: “About 500 million to 1 billion birds are killed every year and mass deaths have been noted about 16 times in the past 20 years,” the PBS NewsHour reports. Even so, there’s plenty to chew on here, and you can’t blame the conspiracy theorists for tackling this one head on.

Could these mass die-offs be attributed to ‘natural causes’ or could climate change and human impact be at the root of it?  Could this be the beginning of the shifting of the North and South Poles?  In an age of knowledge, science and technological breakthroughs, we still cannot explain many events and phenomena on this planet. (Also see What Triggers Mass Extinctions?)