In places throughout the Amazon, some stretches of the region’s most important rivers and tributaries have dried up almost entirely, reducing the normally flowing waterways to a vast plain of broken clay and mud. 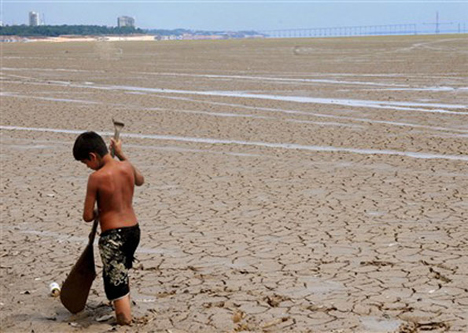 For some people who live and work in this part of the world, life has come to a screeching halt amid the worst drought in recent memory. It is estimated that more than 62 thousand families have been affected by the lack of rainfall with over half the municipalities in the region having enacted a state of emergency. And, on the heels of a recent report about the global droughts to be expected due to climate change — one can only wonder if such scenes will become more common elsewhere.

Throughout the affected state of Amazonia, rivers provide the only means of access to the outside world for families residing in the regions around the capital of Manaus. As the water ceases to flow because of the drought, these families are left stranded without the means to make a living.

According to officials, the level of the Amazon river will likely be lower than the previous recorded record set back in 1963 once final measurements are made.

One major waterway which runs along Manuas, the Rio Negro, hasn’t been this low in the 108 years since recording began, reports Globo Amazonia. The economic impact on this region, one of poorest in Brazil, has been significant.

“Our community… is in a precarious situation. The river has dried up,” said Josimar Peixoto, mayor San Sebastian, a town which depends on the flowing Rio Negro. “With this, families are being harmed because they are without access to transportation.”

In hopes of easing the hardship faced because of the drought, the Brazilian government has promised $13.5 million for the impacted region. But it may only be with the approaching rainy-season that the region will return to normal.

As is the case when noting abnormal and extreme weather patterns, one can only wonder what role global warming plays in it all — particularly as experts warn that such droughts will be far more common in the coming decades as TreeHugger reported last week. Unfortunately, those most affected by the earliest symptoms of a climate change are typically communities most reliant upon consistent weather and the least capable of coping when such patterns change — but still the world seems to dally in enacting legislation sufficient to combat it.

Perhaps if the Potomac, Thames, or Seine ceased to flow, the global community would regard the problem with the urgency it deserves — although by then it may be too late.

Climate change and global warming have been at the centre of debate for the last few years.  Controversy surrounds the causes and effects but what cannot be disputed is that our planet’s climate IS changing at an unprecedented rate.  Governments around the world are already struggling to contain the socio-political effects of rapid climate change.  With rivers drying up in one of the greatest river systems in the world, the global community must force governments to take action.

Climate change and human population growth are exerting increasing pressure on critical resources such as water.  Water and energy are linked, with the looming water- and energy crisis in South Africa Water Rhapsody has incorporated Yes Solar (solar energy solutions).

We offer water tank and rainwater tank installation, rainwater harvesting, grey water recycling and water-saving devices for swimming pools and toilet flush systems (see product demo ).  Our water systems can be retrofitted or built into new buildings and can be adapted to small households or large business blocks, lodges & hotels.   Yes Solar is an official distributor of German-made Solsquare solar water heating systems that are installed by Eskom-accredited solar installers (our solar geysers are eligible for Eskom rebates).  We are authorized JoJo Water Tank dealers and Atlas Plastics water tank suppliers in Mpumalanga and Limpopo Province (best water tank prices in the Lowveld!).

Contact us for a free quote on a solar water geyser, water tank, rainwater tank or water system today!