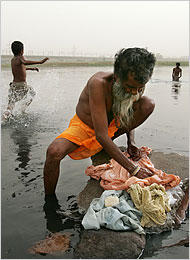 People in New Delhi bathe and wash their clothes in the Yamuna River, a noxious black stream polluted with raw sewage and methane gas.

NEW DELHI — The quest for water can drive a woman mad.

Ask Ritu Prasher. Every day, Mrs. Prasher, a homemaker in a middle-class neighborhood of this capital, rises at 6:30 a.m. and begins fretting about water.  It is a rare morning when water trickles through the pipes. More often, not a drop will come. So Mrs. Prasher will have to call a private water tanker, wait for it to show up, call again, wait some more and worry about whether enough buckets are filled in the bathroom in case no water arrives.

“Your whole day goes just planning how you’ll get water,” a weary Mrs. Prasher, 45, recounted one morning this summer, cellphone in hand and ready to press redial for the water tanker. “You become so edgy all the time.”

In the richest city in India, with the nation’s economy marching ahead at an enviable clip, middle-class people like Mrs. Prasher are reduced to foraging for water. Their predicament testifies to the government’s astonishing inability to deliver the most basic services to its citizens at a time when India asserts itself as a global power.

The crisis, decades in the making, has grown as fast as India in recent years. A soaring population, the warp-speed sprawl of cities, and a vast and thirsty farm belt have all put new strains on a feeble, ill-kept public water and sanitation network. 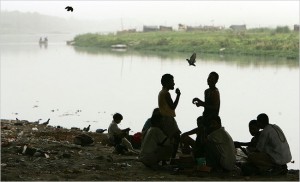 The fabled Yamuna River is clinically dead. But some of New Delhi's poorest residents wake up each day on its banks.

The combination has left water all too scarce in some places, contaminated in others and in cursed surfeit for millions who are flooded each year. Today the problems threaten India’s ability to fortify its sagging farms, sustain its economic growth and make its cities healthy and habitable. At stake is not only India’s economic ambition but its very image as the world’s largest democracy.

“If we become rich or poor as a nation, it’s because of water,” said Sunita Narain, director of the Center for Science and Environment in New Delhi.

Conflicts over water mirror the most vexing changes facing India: the competing demands of urban and rural areas, the stubborn divide between rich and poor, and the balance between the needs of a thriving economy and a fragile environment.

New Delhi’s water woes are typical of those of many Indian cities. Nationwide, the urban water distribution network is in such disrepair that no city can provide water from the public tap for more than a few hours a day.

An even bigger problem than demand is disposal. New Delhi can neither quench its thirst, nor adequately get rid of the ever bigger heaps of sewage that it produces. Some 45 percent of the population is not connected to the public sewerage system.

Those issues are amplified nationwide. More than 700 million Indians, or roughly two-thirds of the population, do not have adequate sanitation. Largely for lack of clean water, 2.1 million children under the age of 5 die each year, according to the United Nations.

The government says that 9 out of 10 Indians have access to the public water supply, but that may include sources that are going dry or are contaminated.

The World Bank, in rare agreement with Ms. Narain, warned in a report published last October that India stood on the edge of “an era of severe water scarcity.”

“Unless dramatic changes are made — and made soon — in the way in which government manages water,” the World Bank report concluded, “India will have neither the cash to maintain and build new infrastructure, nor the water required for the economy and for people.”

The window to address the crisis is closing. Climate change is expected only to exacerbate the problems by causing extreme bouts of weather — heat, deluge or drought.

Water can and will make or break nations.  The world water crisis is something that the global community should take extremely seriously as water scarcity will likely trigger disorder and war.  South Africa is rapidly approaching a water crisis of monumental proportions; it seems that politicians and many leaders are either ignoring this or don’t consider it a priority.  Fortunately, we do not have to rely on the government for water; we can start becoming more water self-sufficient.  Water conservation starts with the individual.  Water-saving habits (see easy water saving tips) combined with greywater recycling and rainwater harvesting (combined with rainwater tanks), will ensure that you are always prepared for water supply cuts (as recently experienced by White River residents in Mpumalanga).

Contact us for a FREE QUOTE on a solar water geyser, rainwater harvesting system, gray water system or water tank (we are authorised JoJo Tanks dealers and supply and install the full range of JoJo water tanks and JoJo tank stands).  Our water tank prices are hard to beat in the Mpumalanga & Limpopo Lowveld (we also supply high quality Atlas Plastics water tanks and other Atlas products on request).