By admin on August 19, 2010 in acid mine drainage, environmental issues

Water Affairs Minister Buyelwa Sonjica has been mandated to urgently 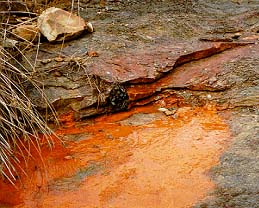 convene a special task team to investigate acid water drainage in some provinces.

Briefing the media on Thursday following Cabinet’s regular Wednesday meeting, government spokesman Themba Maseko said the task team would develop a clear and co-ordinated strategy to deal with the matter.

Cabinet was concerned about reports of acid water drainage in Gauteng, Mpumalanga, North West and the Free State, he said.

The reports suggest this drainage was a result of mining activities and could result in serious health and economic risks for the provinces and the country.

The task team would include the ministers of mineral resources, environmental affairs, co-operative governance and traditional affairs, minister in the presidency responsible for the planning commission and the relevant MECs from the affected provinces.

“The task team will report back to Cabinet on the way forward,” Maseko said.

What is acid mine drainage?

Acid mine drainage (AMD) or acid rock drainage (ARD), collectively called acid drainage (AD), is acidic water (pH <5.0), laden with iron, sulfate and other metals, that forms when geologic strata containing sulfide minerals such as pyrite are exposed to the atmosphere or oxidizing environments. AMD can form from coal mining, both in surface and in underground mines, but AD can also result from metal mining, or under natural conditions where sulfides in geologic materials are encountered in highway construction, and other deep excavations. Iron sulfides common in coal regions are predominately pyrite and marcasite (FeS2), but other metals may be combined with sulfide in the form of chalcopyrite (CuFeS2), covellite (CuS), and arsenopyrite (FeAsS). Pyrite commonly occurs with other metal sulfides, potential causing AD.

The problem is that it will not be a simple case to implement corrective action, it will mostly be a case of informing local communities that their groundwater is/could be contaminated.  Acid Mine Drainage is a long-term water pollution impact of mining and is very difficult to clean up.  Waterways and can also be contaminated by acid mine drainage.  This is where rainwater harvesting would be an ideal solution to ensuring that communities have access to clean, potable water.  The limiting factors with rainwater harvesting are roof area available for harvesting the rain and water storage capacity.  Mean annual rainfall is also a factor but assuming that large surface areas of roof and storage in the form of water tanks and/or reservoirs are available, a few heavy downpours could sustain a household for months. Municipal water is not immune to contamination and over-chlorination; rainwater harvesting and rainwater tanks offer peace of mind and direct control of your household water (and it’s free water!).  Water Rhapsody specializes in rainwater harvesting systems, grey water recycling systems and other water conservation systems and is also an authorised JoJo Water Tank dealer.  Yes Solar is now part of Water Rhapsody Mpumalanga so we can provide you with a range of high quality, Eskom-approved solar water heating systems (that currently have the highest Eskom rebate rating).  Contact us for a free quote!