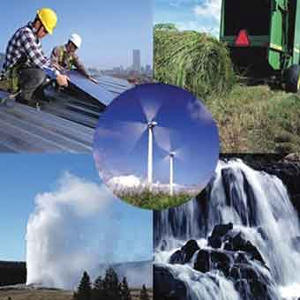 “Greenpeace’s estimate that 78 000 green jobs could be created is conservative,” Glen Mpufane, who heads a development group, who joined a Greenpeace forum on green jobs on Wednesday.

Unemployment is around 25 percent in South Africa, which was hard hit by the global recession.

“We are asking from the government to be more ambitious in their targets of generating electricity from renewable energy,” said Melita Steele, a Greenpeace energy and climate campaigner. “A minimum of 36 percent of the country’s electricity should come from renewed energy sources by 2030.”

Richard Worthington, the climate change programme manager for the World Wildlife Foundation, agreed with the Greenpeace initiative. He said up to 55 percent of the country’s power can be generated from renewables as South Africa has very rich renewable resources.

In April, the World Bank approved a $3.75-billion loan to help South Africa build a major coal-fired plant in the north, though the United States and environmental groups have expressed worries about its impact.

South Africa is the only African nation among the 20 countries that emit nearly 90 percent of the world’s greenhouse gases. South African environmental officials have a long-term plan to reduce emissions, but say that in the short term the country needs polluting technologies to develop.

The private sector needs to lead the shift to renewable energy in South Africa. This will stimulate the renewable energy sector and thus create more green jobs.  This country has one of the highest average irradiation levels in the world and is perfect for solar powered electricity.  Solar panels and solar geysers are becoming more prevalent in urban and rural areas in South Africa.  Eskom has openly admitted that it will not be able to supply all South Africa’s energy needs in the short term.  It is advisable that the public take advantage of the Eskom renewable energy rebates now before the offer expires or the money runs out.  Our Yes Solar-supplied solar water heating systems currently have the highest rebate rating on the market and carry a 10 warranty (unlike many other  solar water systems that only carry a 5-year warranty).  Our solar water heating systems can amortize themselves within 36 months; even quicker with the proposed annual Eskom tarif increases of 25% or more.  Water security in South Africa is another worrying issue; ensure you are protected from water supply cuts by installing Water Rhapsody rainwater tanks, rainwater harvesting systems, grey water recycling systems and other water-saving devices. Water Rhapsody Water Conservation Systems are WWF Green Trust Award winners!  Water tanks are an integral part of our water systems, we are authorised JoJo Tank dealers in Mpumalanga and Limpopo. Contact us for a free solar or water quote today!