The near absence of fresh water for the human population is already beginning to impact many sectors of the world, notably with the current situation in India. 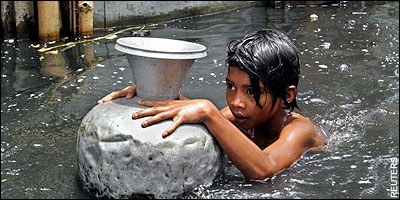 By the year 2020, most major Indian cities are projected to run dry, according to data from the World Bank.  Severe water shortage had already led to a growing number of conflicts across the country, with 90 per cent of India’s territory served by inter-state rivers.

India’s supply of water also is rapidly dwindling primarily due to mismanagement of water resources, although over-pumping and pollution are also significant contributors. Climate change is expected to worsen the situation by causing erratic and unpredictable weather, which could drastically diminish the supply of water coming from rainfall and glaciers.

According to data from Water.org, statistics on the global water crisis are alarming:

With climate change set to have unpredictable consequences on India’s water management, according to Water.org, water use efficiency must increase by 20 per cent and promote basin level integrated water resources management.

Noting that efficient use of crop water can increase the gross irrigated area either by increasing the irrigated cropped area or the irrigation intensity, the organization said that the second green revolution could come from technologies developed in the private sector.

“Water related issues need to be addressed with full involvement of local people and taking into account the local conditions. Farmers should be consulted in any agricultural water management initiatives,” according to Water.org.

It’s ironic that the Indian sub-continent can have severe flooding (such as the floods in Pakistan) and yet have extreme water scarcity issues at the same time.  While flooding can be exacerbated by human disruption of ecosystems, it may also ultimately be linked to climate change induce by humans too.  Water mismanagement in poor or developing nations is rife.  Water resources in South Africa are under threat, not necessarily through lack of funding but often due to corruption and unwise use of municipality funds.  Ignorance also plays a part in water mismanagement in South Africa; many officials and local government employees are hopelessly under-educated and/or placed in positions of authority with no relevant experience.  Water is a renewable resource and if managed properly, much of the current water shortages around South Africa could be alleviated.  Unfortunately, it seems that there is a slow learning process when it comes to water resource management in South Africa.   Conflicts over water resources are becoming a worrying reality. Private individuals and businesses need to take the initiative and implement water conservation strategies.  Water Rhapsody has almost 17 years of experience in the water conservation business.  We provide FREE QUOTES on rainwater harvesting systems, grey water recycling systems (greywater irrigation & greywater for toilet flushing), water-saving devices and JoJo water tanks and water tank stands (we are the authorised JoJo Water Tank dealers for Mpumalanga and Limpopo).  We have also recognised the need for domestic solar water heating systems and we are now a Yes Solar dealer in Mpumalanga (based in the White River/Nelspruit area).  Contact us today for a free quote!