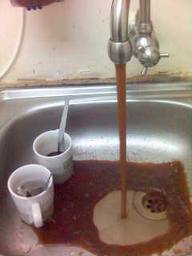 After a week without water, residents of Pennington can open their taps again, but they say the water is of such poor quality it is undrinkable.

Last week, Scottburgh and Pennington were left dry when, during repairs to the Mzinto River bridge, a key water pipe was damaged .

Cynthia Wortley, an elderly resident in Pennington, is still upset. She said when the water returned it did not look drinkable.

“We had to go without water from Tuesday until Sunday night,” said Wortley, adding that getting through to the Ugu municipality 24-hour call centre had been difficult.

“I tried to get hold of someone to help me from Tuesday but I only managed to get through on Wednesday. I was later informed by a friend that (a water) tanker was at the Royalton Hall so I rushed there, only to find the tanker had gone.”

Cyclone Construction, the company in charge of the bridge repairs, said it was told the water pipe was empty and could be removed. “But when we started construction we discovered that there was water running in it so we contacted Ugu municipality,” said a foreman, who did not want to be named.

Another resident, Isabel Sharp, said she, too, was disappointed by how residents had been treated. “When the driver (of the water tank) comes he just hoots and carries on driving, he hardly stops. We elderly cannot run after him – how does he expect us to collect water?”

Local community newspaper the Rising Sun quoted the driver saying his job was made difficult because many residents were rude.

A manager at the Pennington Super Rite Supermarket, who did not want to be named, said “We have a bakery, kitchen and a butchery and our cleaning system is totally dependent on water. Hygienically, not having water was a huge inconvenience and it is also essential for preparing the food.”

He was affected at home, too. “I’m a big guy, so now imagine me using only two litres of water warmed in a microwave, to bath.” He moved to a friend’s house for a couple of days so he could shower.

Ugu municipality general manager for water services, Maxwel Pawandiwa, said the municipality believed the water pipe diversion had been done incorrectly. He said the matter would be looked into further.

The above scenario could be played out anywhere in South Africa at any time.  Local government is generally not very efficient and sometimes water shortages are caused by derelict of duty and human error.  White River residents (Lowveld, Mpumalanga) know how terrible municipal water quality can be.  Water scarcity in South Africa does not help the situation!  If the residents and businesses of Scottburgh and Pennington had rainwater tanks installed, they would’ve hardly noticed the water supply cut.  They would’ve also been able to rely on their clean rain water until the municipal water quality issues had been attended to.  Even without rainwater harvesting systems in place, installing a water tank for emergency water storage is wise.  Country estates in South Africa often have their own water treatment and water supply facilities but even these are not immune to problems; water shortages can arise from homeowners who abuse cheap or free water.  Water Rhapsody can help households and businesses to become more independent and self-reliant when it comes to water.  Our robust rainwater harvesting systems and grey water recycling systems are the product of nearly 17 years in the water conservation business and have been thoroughly tested.  Yes Solar can also help you attain a level energy independence with our range of high quality, German-made solar water heating systems.  Don’t wait for the next water supply problem or power failure; contact us today for a free quote.