The toilet that can help solve our water & energy problems

There is a ‘toilet revolution’ taking shape – with tankless toilets which save water while reducing watershed pollution. 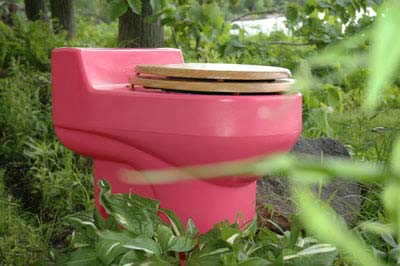 Upwards of 3 million people die annually from diarrhea, dysentery, and parasitic diseases — all for the want of clean water. Meanwhile, each year in the water-rich United States, 2.1 billion gallons of the world’s most precious liquid are used, not to water thirsty crops or slake parched throats, but to flush human waste from home toilets to municipal sewers. While harvesting rainwater and recycling graywater are fine strategies, it’s time to get to the seat of the problem. We need a Toilet Revolution.

As frequently happens, the solution to this modern problem can be found in the recent past — and the Third World present. Jeff Conant, author of The Community Guide to Environmental Health, has traveled the world in search of the perfect “waterless toilet.” He found it in the Mexican town of Tepotzlan, which boasts hundreds of “non-traditional waterless” eco-loos. In the 1980s, Tepotzlan’s innovators got a boost when former UNICEF worker Ron Sawyer settled in to help the locals design a new generation of “eco-san” toilets.

While the practice of using human waste as fertilizer is as old as humanity itself, Tepotzlan’s eco-sanistas marked an engineering watershed when they found a way to separate feces from urine. A locally designed toilet seat harvests the fluids while allowing the solid wastes to fall into a dry compost toilet. (Not such a strange idea: The human body is designed to send solid and liquid wastes in opposite directions.) One immediate result of separating pee from poo is the elimination of the unpleasant aromas associated with the traditional outhouse.

While installing waterless toilets in high-rise apartments might raise certain engineering challenges, “urine-separating dry toilets” are being adopted around the world — from South Africa, Peru, Cuba, and India to the United States, where composting waterless toilets can be purchased online. There are several to choose from, including Biolet, Envirolet, Sun-Mar, the venerable-sounding Clivus Multrum, and the EcoJohn (an “incinerating toilet” that’s being used in US homes and military camps). Most sell for around $1,500. Home Depot lists a Biolet for $1,400 (about the price of a new fridge). The Nature’s Head urine-separating dry toilet (designed by sailors for onboard use) is a bargain, priced at $850.

The first flush of the Toilet Revolution was heard in Orange County, of all places. In 1997, San Diego announced plans to have a “Toilet-to-Tap” system up and running by 2001. In 1998, California’s governor signed a law directing the state to evaluate the potential of recycling the post-toilet flow to “ensure that any water produced by these systems meets the identical standards that our drinking water does now.” While San Diego’s filtration system successfully reduced contaminants to the same level as “untreated fresh water,” many people had trouble swallowing the idea of sipping treated waste water, even though toilet-to-tap is a proven, Space-Age technology. For decades, America’s orbiting astronauts have thrived by drinking their own urine, recycled endlessly through space shuttle filtration systems.

There’s another powerful reason to separate and recycle urine. It turns out that urine — the world’s most abundant waste — could become the “fuel of the future.” Ohio University researcher Geradine Botte has developed a catalyst that can extract hydrogen fuel from urine. While it takes 1.23 volts to split two hydrogen atoms from H2O, it only takes 0.37 volts to strip four hydrogen atoms from a urea molecule. That’s twice as much hydrogen for one-third the effort. The Royal Society of Chemistry’s journal, Chemical Communications, confirms Botte’s discovery: “While water is an increasingly limited essential resource,” the journal notes, “there will never be a lack of urine.”

Existing nickel electrode technology can be easily scaled up to produce hydrogen from the effluent of today’s sewage treatment plants. As Botte notes: “We do not need to reinvent the wheel.” But tomorrow’s water-smart homeowners will need to adapt. There will be one more container to add to the line-up for weekly curbside pick-up — the urine bin.

Solving two problems for the price of one is a rare deal, especially when tankless toilets will start paying back the investment immediately as household water use falls by one-third. Sometimes, relief can come from surprising places. If this all pans out, we may need to replace the phrase “piss-poor” with “urine-rich.” 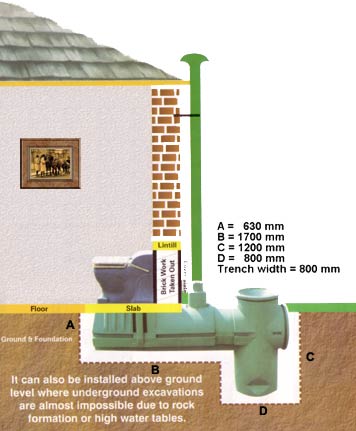 Waterless toilets are a great way to save water and recycle waste.  One wonders if, in 20, 30 or 40 years time, people will be talking about the ‘old days’ when water was used to flush human waste away and that they didn’t event recycle it!  Having seen a number of variations on the theme, there are some really rough and ready waterless toilets as well as some incredibly modern and attractive models.  It does take some getting used to!  There is still market resistance to the idea, especially among people who have abundant access to to water.  There are many communities around South Africa where water is a hard-to-come-by commodity; waterless toilets are ideal under these circumstances.  Water Rhapsody supports ALL water conservation efforts and a waterless toilet obviously always beats a water-borne flushing mechanism when it comes to saving water.  However, if you have no plans to start using waterless toilets then you should consider installing a low-flow toilet or, even better, our Multi-Flush toilet system (see product demo). The Multi-Flush system simply replaces your existing flushing mechanism.  Retrofitting this system to all your toilets could save you up to 20% on your water bills.  We also advocate rainwater harvesting (stored in water tanks) and grey water recycling.  Why use drinking water to flush your toilets when you could use greywater?  All Water Rhapsody’s water systems are eco-friendly and carry a guarantee.

See the next post, a video that explains how a waterless toilet system works.