A WATER-stressed rural community of Mount Ayliff in Transkei has been given some relief with water made from fog. 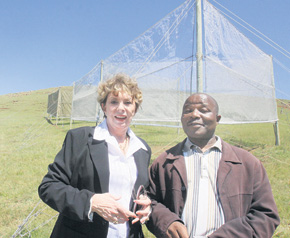 PIONEERS: Professor Jana Olivier of Unisa’s environmental science department, left, and Alfred Nzo District Municipality mayor Gcinikhaya Mpumza during the launch of the fog-harvesting project at Cabazana Village near Mount Ayliff yesterday. In the background are the nets that trap fog and turn it into water. Picture: LULAMILE FENI

The project, which was made possible by the Alfred Nzo District Municipality and University of South Africa climatologist, professor Jana Olivier, has already yielded positive results.  More than 30 households in Cabazana Village in Mount Ayliff have already tasted the water from the fog-harvesting project, where it was launched this week.  The project was launched in the Nolangeni Mountains on the boundaries of KwaZulu-Natal.

“I have been doing research on fog for 20 years. My work at first was focused on fog as a health hazard to vehicles and what fog is and where it forms.

“Then we started doing research on fog harvesting. We got funding from the Water Research Commission…then we designed the fog water system,” Olivier said.

Olivier said they have made nets out of stainless steel and a gutter to trap the fog.  The nets are installed against a mountain where fog is prevalent.  The droplets of fog which consist of water are trapped on the surface.  As the fog moves the droplets are deposited on the net where they get heavier and then run down and drip into the gutter, then straight into tanks.

“We put the system high up against the mountain where there is lots of fog and also where the water is just gravity-fed down, so you don’t need electricity,” Olivier said.  She said the Cabazana system had about 700² metres of netting.

“We estimate that we should get on average about five litres of water per square metre per day,” she said.  She said this was also dependent on the weather and how much fog was present.

“It’s an absolute simple system; we are just doing what nature is doing,” she said.  Olivier said the water was safe for consumption.

“It’s of incredible pure quality because it comes from the clouds; fantastic and ideal water quality,” she said.

Alfred Nzo mayor, Gcinikhaya Mpumza was excited about the project launch.  He said the idea to approach Olivier came after he had read an article in 2006 in the Dispatch about a fog harvesting project. Mpumza then got around to contacting her.

“We came across this piece of research in the Daily Dispatch and we engaged Unisa.

“On a budget of R300 000 we started rolling out the project in this area,” Mpumza said.

He described it as a “light way” of providing water which was clean to communities.  Alfred Nzo was a water-stressed area, with some places not having access to water.

“We have a challenge of water because about 40 percent of our community here does not have basic water,” Mpumza said.

Gladys Funda, 69, a resident of Cabazana, said she was very happy about the water project because at her age it was difficult to fetch water from streams.  Thobile Gayi, 50, said it was exciting news because water had been a challenge for them for long.

“We are happy that finally we have water and that it is clean and safe to drink; this is really wonderful news for all of us,” Gayi said. — By LUBABALO NGCUKANA, Mthatha Bureau, lubabalon@dispatch.co.za

“It’s an absolute simple system; we are just doing what nature is doing” – if only we could acknowledge  more often that Nature has come up with simple and effective solutions that we can imitate.  Please have a look at the video in an earlier post to see an example of a creature harvesting fog water.  Water harvesting, whether it’s rainwater harvesting, seawater desalination or cloud/mist/fog harvesting, are all possible solutions to the water crisis in South Africa.  A Water Rhapsody consultant will can recommend the right solution for you.  Grey water recycling systems and rainwater tanks will ensure that your harvested water is used efficiently and in an environmentally friendly way. Water Rhapsody has incorporated Yes Solar Mpumalanga so that we can offer solar energy solutions in addition to our WWF Award-winning water systems.  Our solar water heaters are made by Solsquare (Germany) and are Eskom-approved.  All our solar geysers are fitted by qualified Eskom-approved solar installers so that they qualify for Eskom renewable energy rebates.

Contact us for a free quote on a rainwater harvesting system (and rainwater tanks), gray water systems, water tanks (we are JoJo Tank & Atlas Plastics dealers in Mpumalanga and Limpopo) or Solsquare solar geyser.