Rainwater harvesting illegal in some US states

Thankfully, rainwater tanks and rainwater collection are not illegal anywhere in South Africa, in fact government encourages rainwater harvesting. Apparently a few states and counties in the US have been taking legal action against private citizens, see the article below. 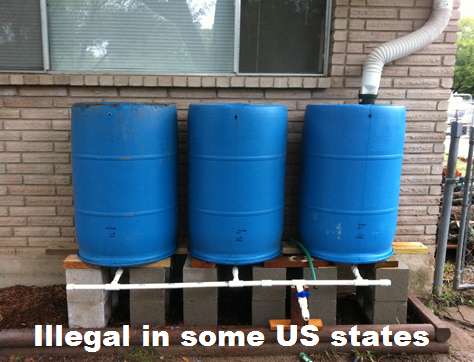 Collecting rainwater is a very common and environmentally friendly thing that is done, but just like most things good the US government has found a way to criminalize it.

Apparently, it is illegal to collect rainwater in some states, and you can go to jail for it.

Gary Harrington from Eagle Point, Oregon has been sentenced to jail for 30 days and having fines more than $1,500 for collecting rainwater. Oregon considers any water property of the state; it doesn’t matter if it falls from the sky or not.

You can, however, collect, store and use rainwater if you get a permit from the state, but Harrington’s permit was revoked, and the reasons are not clear. He had been wrestling Oregon’s water resources department for more than ten years and in 2002 the state informed him they received “complaint” about three reservoirs that he had on his property. These reservoirs collected and stored rainwater, and one of them had been on his property for at least four years.

When he had received his notice, he applied for the correct permits that are required by the state to collect and store rainwater. His permits were granted in 2003, but the state later reserved the decision. Harrington said They issued me my permits. I had my permits in hand, and they retracted them just arbitrarily, basically. They took them back and said ‘No, you can’t have them,’ so I’ve been fighting it ever since.”

He had planned to appeal the conviction, which contains nine misdemeanor charges for having “three illegal reservoirs” on his property. He holds the charges that are based on a 1925 law that says the city of Medford owns all water in the Big Butte Creek watershed and its tributaries. Harrington said to this, “Way back in 1925 the city of Medford got a unique withdrawal that withdrew all — supposedly all — the water out of a single basin and supposedly for the benefit of the city of Medford. The withdrawal said the stream and its tributaries. It didn’t mention anything about rainwater, and it didn’t mention anything about snow melt and it didn’t mention anything about diffused water, but yet now, they’re trying to expand that to include that rain water and they’re using me as the goat to do it.”

He argues that he isn’t deriving water from the Big Butte Creek; instead the water is “diffused water” so it does not apply to the 1925 law. He is saying that they government is bullying him. “They’ve just gotten to be big bullies and if you just lay over and die and give up, that just makes them bigger bullies. So, we as Americans, we need to stand on our constitutional rights, on our rights as citizens and hang tough. This is a good country; we’ll prevail.”

There are many states like Oregon and Colorado that have strict laws that concern the collection of rainwater. The only explanation of these laws would be that the government doesn’t want self-reliant citizens. There are other laws that require people to hook up energy grid whether they like it or not. Citizens like Gary need to be supported because of their actions and be applauded for having the guts to stick up for themselves against authority.

Video: How to repair a plastic water tank or bucket at home
Some reasons to consider greywater harvesting