It is certainly feasible for households to obtain all their water requirements by the installation of rain water tanks, depending, of course, on roof surface area, local rainfall patterns and water usage.  As in India, this possibility applies to many parts of South Africa too.  Most of South Africa experiences a dry winter and a rainy summer – if enough water storage capacity is available (for example 10000 litre tanks, 15000 litre tanks or even 20000 litre tanks) and other water conservation systems are implemented (such as grey water irrigation systems), the possibility of becoming water self-sufficient is a reality for many households and businesses in South Africa. 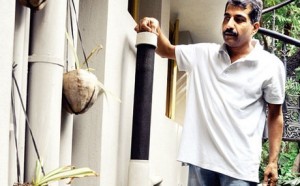 Are you worried about growing water scarcity in the city or the hefty water bill that you may end up paying every month? This Bangalorean may have something to allay your fears. A R Shivakumar has not paid a penny for his family’s water needs for the last 19 years.

Shivakumar, who is principal investigator for Rainwater Harvesting (RWH) at Karnataka State Council for Science and Technology (KSCST), built his house “Sourabha” in Vijaynagar, southwest Bangalore, in 1994. The home depends entirely on rain water.

Rain water collecting on the roof is channelled into a water tank of 4500 litres capacity built on the ground floor. A Popup filter cleans the water before it is stored for use.

“Rain water is pure, but it gets contaminated when it collects on the roof (with leaves, bird droppings, dust). These impurities need to be filtered before the rainwater is stored in a water tank. Hence the Popup filter,” says Shivakumar.

Overflow from the water tank is allowed to rundown through a rainwater pipe, fixed to the wall, leading to an underground sump, built under the portico at the entrance of the house.

In case of heavy rain, when both the water tanks fill up, rainwater is diverted to percolate into the ground through a system of percolation tanks. Four interconnected, recycled plastic drums have been buried underground with their bottoms cut out to recharge ground water.

During dry weather spells, water is drawn from a shallow tubewell, which is recharged with rainwater, to meet the household’s requirements.

Even in present conditions where the ground water table is sinking lower and lower across Bangalore, standing at an average of 600 feet, at his house, water is available at a depth of mere 35 to 40 feet, says Shivakumar.

For his family of four, Shivakumar estimates a  requirement of 400 litres per day, excluding water to flush – he recycles water from the washing machine for this.

Water from the washing machine is treated using aeration system. In this, activated carbon is used to absorb bad odour from the soapy waste water and then stored in a tank to be used later. Also, waste kitchen water is filtered and used for gardening.

Though, government of Karnataka realising the importance of harvesting rainwater,  has made RWH mandatory for properties built on plots of 60 by 40 dimension in Bangalore, it is not effectively implemented.

Shivakumar believes, if every household in Bangalore implemented techniques of RWH, it would take care of one third of the city’s water needs.

Shivakumar also nurtures greenery on a considerable portion of his property. This helps to keep his home cool and with application of energy conserving  methods, he has reduced his electricity bills too.  A vermicompost unit on his premises treats domestic solid waste which is then used as manure for plants.

What Can Renters Do to Harvest Rain Water (Without Breaking the Law)?
Rainwater Collection: Affordable Conservation