With only weeks to go before thousands of holiday-makers travel to KwaZulu-Natal, experts have warned that the water off many Durban beaches contains toxic chemicals. 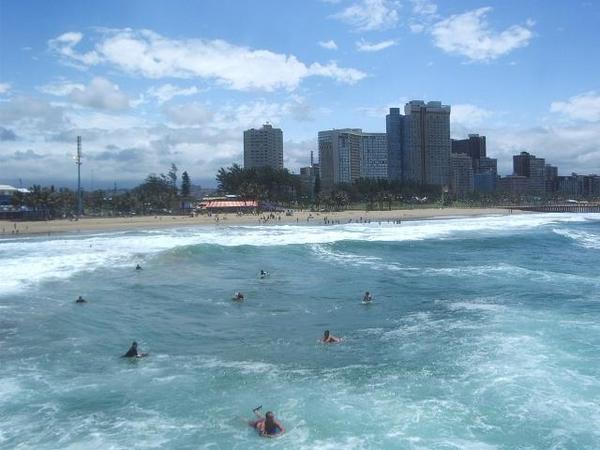 “The tests carried out by the eThekwini municipality’s water and sanitation department revealed high levels of E.coli and Enterococcus bacteria, which cause cholera and gastro-intestinal illnesses,” she said.

The city tested beaches around Durban in the past year, ending in July, and the results revealed that the quality of the beach water did not meet South African water standards.

“Beaches, including Anstey’s and Brighton, are among those affected,” she said.

In February, the bacterium Vibrio vulnificus was found at a Durban beach after a local doctor contracted it while surfing.

This bacterium, which might cause blistering and inflammation, had eaten through the tissue on Dr Peter Breedt’s foot, leaving an open wound.

He was among several people who became sick after swimming or surfing off city beaches.

Over the years, the city has prided itself on its pristine beaches being better than others around the country.

But the disposal of toxic chemicals, fuel-pipe leaks and human waste spilling into the sea have gradually destroyed the quality of the city’s seawater.

The popular spots for holiday-makers are now overflowing with rubbish and have become breeding ground for fleas.

But city officials yesterday assured visitors that Durban was more than ready to host its festive season holiday-makers.

Thabo Mofokeng, eThekwini municipal spokesman, said it would be “all systems go” at most tourist hot-spots and there was nothing for visitors to worry about.

He said festive season plans were already in place and ready for implementation.

“Our planning started some time ago and involves all municipal units such as the metro police and the SAPS. The plans include beach safety, traffic management and a number of events to entertain visitors,” he said.

Mofokeng said the city was expecting a bumper festive season and thousands of holiday-makers would choose Durban as their destination.

“We are satisfied with the quality of the water at our beaches and they are safe for bathing. Water quality is constantly monitored to ensure the safety of bathers, especially during the rainy season,” he said, adding that most beaches would be open except for parts of Blue Lagoon which is being upgraded.

“Development is progressing well and is expected to be complete by March.”

Andrew Layman, CEO of the Durban Chamber of Commerce and Industry, said local businessmen were concerned about several matters relating to the beach-front.

“We are always striving for the achievement of a high standard with respect to the cleanliness of the beach and the public amenities, as well as the security of visitors,” he said.

A few years ago the city had 10 beaches with the internationally recognised Blue Flag status but it pulled out of the programme in 2008 after several of its beaches failed to meet the scheme’s standard for seawater quality.

This is an embarrassment to the people of South Africa; why can’t local government seem to control the constant flow of industrial effluent and human waste that enters a world renowned tourist destination?  Although South Africa’s environmental laws are of an international standard, the enforcement of these laws and will to prosecute offenders is seriously lacking.  Stormwater also carries large amounts of pollutants and contaminants into local water ways and the sea.

Rainwater harvesting by big industries (with their huge roof surface areas) would be a good start to reducing stormwater pollution.  Industries also consume a high percentage of local water resources; a number or 10000 litre, 15000 litre or 20000 litre rain water tanks installed on industrial premises would also reduce industries demand on municipal water.  Homeowners and businesses can also do their part by collecting rainwater and storing it in rain water tanks – reducing stormwater runoff and saving money and water at the same time.  Click on the links below to see the range of JoJo Tanks products available in South Africa.