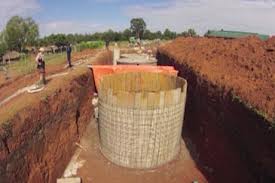 Emily Parsons, with the help of her father, set about building a rain harvesting system for the Watoto Orphanages

Collecting rain water in drought-prone regions might seem like a straightforward idea. But in Uganda it’s almost never done because roofs are either thatched or don’t have gutters. Now a Waiheke father and daughter have used their skills to change all that.

Brett McDonald is an artisan. He hand makes concrete water tanks for the steep hills of Waiheke Island. He now does the same in Uganda after he was roped in by his daughter to help with an aid project called the Village Project.

“Emily was up there building houses for three or four years and saw that there were no gutters on the roofs and saw that water was a bit of a problem and said, ‘my dad could come up and build some water tanks’,” says Mr McDonald.

“I was like, ‘why are they not collecting the water?’” says Emily Parsons. “For me it’s so natural being brought up on Waiheke. That’s what we do.”

Uganda is one of the world’s poorest nations. One-third of the population lives on less than $1.50 a day. Most buildings have thatched roofs and no guttering, and for three months every year drought strikes, wells run dry, and people walk kilometres to collect water in jerry cans.  But when it does rain, it pours.

Ms Parsons, with the help of her father, set about building a rain harvesting system for the Watoto Orphanages.

Of course making a water tank in Uganda was never going to be as straightforward as it is in Waiheke. Sourcing the right materials was challenging, so the team had to manually sift through 24 tonnes of river sand before they could mix it into concrete.

“It’s river sand but it comes out with mud and clay from the river and things so we sifted it all and made it nice for the plaster – all by hand,” says Ms Parsons.

The team took 10 days to build four water tanks from scratch – in a pit so the water will keep cool.

As they worked, they trained 10 Ugandans, who can now make the water tanks themselves using Mr McDonald’s method.

The four water tanks will supply 100,000 litres of water. Ms Parsons’ charity has plans to build as many as 2000 more.

A noble project indeed.  Sometimes one forgets that many rural homes in Africa are poorly suited for rainwater harvesting due to their thatched roofs.  However, corrugated iron roofs are becoming the standard roof material in many parts of Africa.  Corrugated iron is one of the best types of roof material for harvesting rainwater as it is impervious, very smooth and easy to keep clean.  These roofs need to have at least one gutter to collect the rainwater and divert it to a downspout leading to a rain water tank.  Click on the links below to view the wide range of JoJo water tanks, rainwater tanks, tank stands and other JoJo Tanks products.