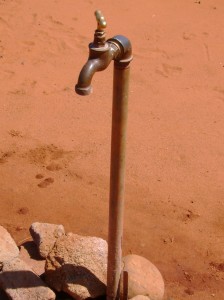 “The Democratic Alliance welcomes the steps taken by the SA Human Rights Commission in Brandfort… regarding their failure to provide regular water to the community,” DA parliamentary leader Lindiwe Mazibuko said.

Mazibuko filed a complaint with the SA Human Rights Commission (SAHRC) after walking 3.5 km with women of the Joe Slovo informal settlement at Brandfort to draw water in March.

The Marantha Clinic, near the Joe Slovo settlement, had also been without a regular supply of water, allegedly for weeks. Nursing staff could not wash their hands between treating patients.

The commission in the Free State conducted an inspection and confirmed the DA’s complaints.

Free State SAHRC manager Lindiwe Khumalo said in a letter it had made a preliminary assessment and found there was indeed a prima facie violation of the Constitution.

The municipality had meanwhile responded to the commission’s report. Khumalo said the commission would hold further meetings with the Masilonyana municipality’s manager, to establish if plans to fix the situation were adequate.

Mazibuko said several questions remained about the provision of clean water to the town’s residents. These include questions on whether phase one of the Brandfort water treatment system, build for over R13 million in the 2011/2012 financial year, had been fully completed.

Mazibuko said the DA was looking forward to follow-up reports by the SAHRC.

Unfortunately, this sad state of affairs is all too common in many of the smaller municipalities and townships in South Africa. Does the non-provision of clean water need to go to courts (as in the town of Carolina, Mpumalanga) and become a human rights issue?  It seems that this route is the only way to ensure action is taken.  As an interim measure, government should provide the communities with water tanks (preferably high quality JoJo water tanks) and regular refilling of the tanks by water bowsers (or trucks fitted with horizontal tanks).