In 1990, the Voyager 1 space probe snapped a photograph of the earth. Made famous as a symbol of our common humanity and of a fragile planet, the image came to be known as the Pale Blue Dot. The dot was blue, of course, because its surface is wholly water. 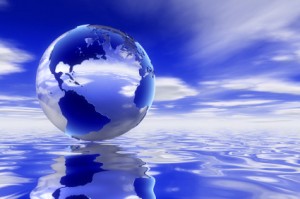 On day five of the Aspen Ideas Festival, leading thinkers on water issues gathered on a panel to discuss the question, “Is Water the Next Global Security Threat?”

Access to clean water around the world correlates directly with socioeconomic prosperity. In India, the poor pay an average of seven times more for their water than the middle and upper classes, whose homes are connected to water utility grids. The disparity makes access to water a critical friction point for instability within countries. Because in many instances, water, unlike many resources, moves continually across national borders, translating a resource problem into political tension between countries.

“I can’t think about water without thinking about energy,” said Sylvia Lee, water manager for Skoll Global Threats. Not only is production of both fossil and bio fuels water intensive, but hydroelectric power can cause substantial environmental stress, and thus political tension, downstream.

Hydroelectric dams planned on the Mekong River threaten to harm the largest inland fishery in the world as well as the agricultural zone of the Mekong Delta, where 40 percent of the world’s rice is produced. Among the countries of southeast Asia that depend on the Mekong, increased water scarcity, due to receding glaciers or withdrawals, is likely only to increase tensions.

Ultimately, however, the problem is not one of scarcity but of distribution. Panelists agreed that even in a world of 9 billion inhabitants there would be water enough for all. “Water doesn’t flow downhill,” said Steven McCormick, former president of The Nature Conservancy, “it flows toward money.”

Acknowledging this reality, Gary White is working to turn the world’s poor into water customers by applying microfinance to water and sanitation. “There’s never going to be enough charity in the world to get water and sanitation to everybody who needs it,” he said, while cautioning that “water resources should not be privatized.”

Significant challenges notwithstanding, there is reason to be hopeful. In the last two decades about a billion people gained access to safe drinking water, said White. Consensus reigned among the panelists that the world contains enough water to support even a population of 9 billion.

The key will be harnessing the political will to fix the problems and iniquities in our distribution system. “The hardest thing is the fight against inertia,” said Sylvia Lee.

Water is usually of little concern to the middle- and upper classes, in South Africa or anywhere in the world.  It’s the poor majority who lack many of the basic services that many take for granted.  Water and energy are linked and will certainly increasingly become politicized.  Water distribution is a serious problem in South Africa’s rural areas; an interim solution would be for the government to subsidize water tanks and/or rainwater tanks for rainwater harvesting.  Water tankers could be employed to fill water tanks at households or community centres.  This is occurring in some areas but not on a bigger enough scale to prevent frequent violent service delivery protests.